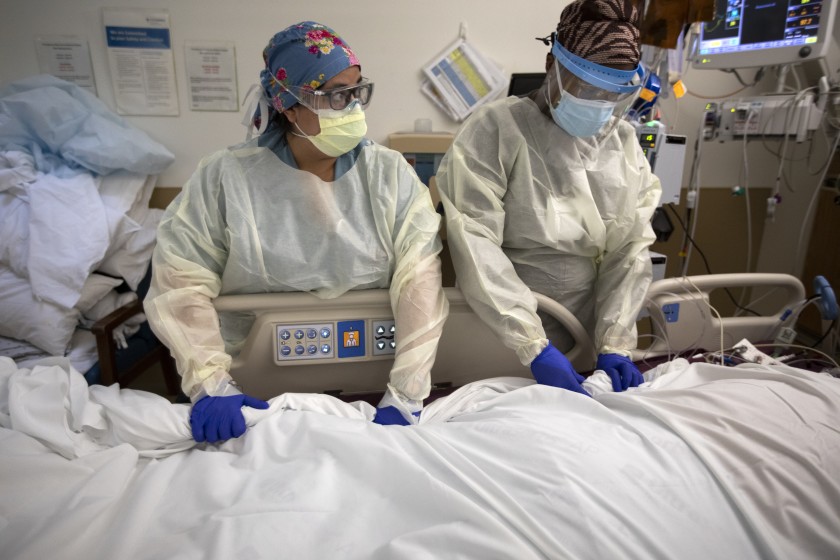 Between 20 to 50% of frontliners in California hospitals are not excited about getting the WarpSpeed-developed COVID19 vaccines, which they even think they’re being experimented upon by the government.

As usual, government epidemiologists invoke the age-old “pandemic will stretch indefinitely” guilt tripping and fearmongering tactics in order to reverse the growing trend that is now giving them some level of panic as to how they will dispose the unused vials, i.e. it should be public knowledge by now that most high-ranking medical officials are receiving sales commission in a variety of forms from Big Pharma.

The LA Times reported, with an attenuated headline,

Some healthcare workers refuse to take COVID-19 vaccine, even with priority access

They are frontline workers with top-priority access to the COVID-19 vaccine, but they are refusing to take it.

At St. Elizabeth Community Hospital in Tehama County, fewer than half of the 700 hospital workers eligible for the vaccine were willing to take the shot when it was first offered. At Providence Holy Cross Medical Center in Mission Hills, one in five frontline nurses and doctors have declined the shot. Roughly 20% to 40% of L.A. County’s frontline workers who were offered the vaccine did the same, according to county public health officials.

So many frontline workers in Riverside County have refused the vaccine — an estimated 50% — that hospital and public officials met to strategize how best to distribute the unused doses, Public Health Director Kim Saruwatari said.

The vaccine doubts swirling among healthcare workers across the country come as a surprise to researchers, who assumed hospital staff would be among those most in tune with the scientific data backing the vaccines.

… April Lu, a 31-year-old nurse at Providence Holy Cross Medical Center, said she refused to take the vaccine because she was not convinced it was safe for pregnant women. She is six months pregnant.

Clinical trials have yet to be conducted on pregnant women who take the vaccine, but experts believe the vaccine is unlikely to pose a specific risk, according to the Centers for Disease Control. The agency says pregnant women may choose to be vaccinated.

Some of her co-workers have also declined to take the vaccine because they’ve gone months without contracting the virus and believe they have a good chance of surviving it, she said. “I feel people think, ‘I can still make it until this ends without getting the vaccine,’” she said.

The extent to which healthcare workers are refusing the vaccine is unclear, but reports of lower-than-expected participation rates are emerging around the country, raising concerns for epidemiologists who say the public health implications could be disastrous.

A recent survey by the Kaiser Family Foundation found that 29% of healthcare workers were “vaccine hesitant,” a figure slightly higher than the percentage of the general population, 27%.

“Even the name, Operation Warp Speed, draws some concern for people about the rush to push it through,” said Dr. Medell Briggs-Malonson, an emergency medicine physician at UCLA Health who has received the vaccine. Still, she urged her colleagues to do the same.

“It’s certainly disappointing,” said Sal Rosselli, the president of the National Union of Healthcare Workers. “But it’s not shocking, given what the federal administration has done over the past 10 months. … Trust science. It’s about science, and reality, and what’s right.”

The consequences are potentially dire: If too few people are vaccinated, the pandemic will stretch on indefinitely, leading to future surges, excessive strain on the healthcare system and ongoing economic fallout.

“Our ability as a society to get back to a higher level of functioning depends on having as many people protected as possible,” said Harvard epidemiologist Marc Lipsitch.

Respondents to the Kaiser Family Foundation survey who said they probably wouldn’t get the vaccine said they worried about side effects; they lacked trust in the government to ensure the vaccines were safe; they had concerns about the role of politics in the development of the vaccines; or they believed the dangers of COVID-19 had been exaggerated.

In online forums, some healthcare workers throughout the country have expressed frustration over going first — a status some have associated with experimentation.

Nicholas Ruiz, an office assistant at Natividad Medical Center in Salinas, Calif., said healthcare workers wrestled with the same doubts, fears and misinformation about the disease as the public. Though he interacts with nurses who treat COVID-19 patients, he’s not taking it and knows many others who aren’t.

“I feel like the perception of the public with healthcare workers is incorrect. They might think we’re all informed of all of this. They might think that because we work in this environment,” Ruiz said. “But I know there’s a lot of people that have the same mentality as the public where they’re still afraid of getting it.”

In Fresno County, interim Public Health Officer Dr. Rais Vohra said Tuesday that some “people who are qualified to get the vaccine are not ready to get it.” Such healthcare workers, including those who are pregnant or want to become pregnant, have been hesitant as questions about the long-term effects arise.

Meanwhile, the case against the whole COVID19 operation is mounting.

No less than high level experts from Big Pharma are expressing their concerns over what can only be described as “crimes against humanity” referring to the lockdown of the global economy,

… and the mandated wearing of useless facemasks, or faceshields, that do nothing but reduce the supply of oxygen to the brain.

Several studies have indeed found significant problems with wearing such a mask. This can vary from headaches, to increased airway resistance, carbon dioxide accumulation, to hypoxia, all the way to serious life-threatening complications… A more recent study involving 159 healthcare workers aged 21 to 35 years of age found that 81% developed headaches from wearing a face mask. Some had pre-existing headaches that were precipitated by the masks. All felt like the headaches affected their work performance.

The importance of these findings is that a drop in oxygen levels (hypoxia) is associated with an impairment in immunity. Studies have shown that hypoxia can inhibit the type of main immune cells used to fight viral infections called the CD4+ T-lymphocyte.

This occurs because the hypoxia increases the level of a compound called hypoxia inducible factor-1 (HIF-1), which inhibits T-lymphocytes and stimulates a powerful immune inhibitor cell called the Tregs. This sets the stage for contracting any infection, including COVID-19 and making the consequences of that infection much graver. In essence, your mask may very well put you at an increased risk of infections and if so, having a much worse outcome.

People with cancer, especially if the cancer has spread, will be at a further risk from prolonged hypoxia as the cancer grows best in a microenvironment that is low in oxygen. Low oxygen also promotes inflammation which can promote the growth, invasion and spread of cancers. Repeated episodes of hypoxia has been proposed as a significant factor in atherosclerosis and hence increases all cardiovascular (heart attacks) and cerebrovascular (strokes) diseases.

Obviously, when more people are hypoxiated, there will be more potential cancer patients to profit from.

“Deprive a cell 35% of its oxygen for 48 hours and it may become cancerous.”

The RT-PCR tests that are being used to bloat the number of COVID19 infections are not designed to diagnose patients for COVID19, but are merely used to detect the presence of viral fragments during the production of vaccines, according to its own designer, Dr Kary B. Mullis.

Compounding the problem is the gross inability of lawyer-politicians to understand the false science behind the whole exercise, and their inherent need to use whatever emergencies they can hide their inadequacies and corruption from, while performing their normal duties.

Worst, the political and medical officials are seen violating their own set of rules against social distancing during press conferences, social gatherings, simulating actual vaccination using empty syringes, and Big Pharma CEOs are refusing vaccination altogether with insulting alibis, e.g. , “We don’t want to cut the line of people wanting to get vaccinated.”

All of these are on top of the growing number of deaths and injuries post COVID19 vaccinations.