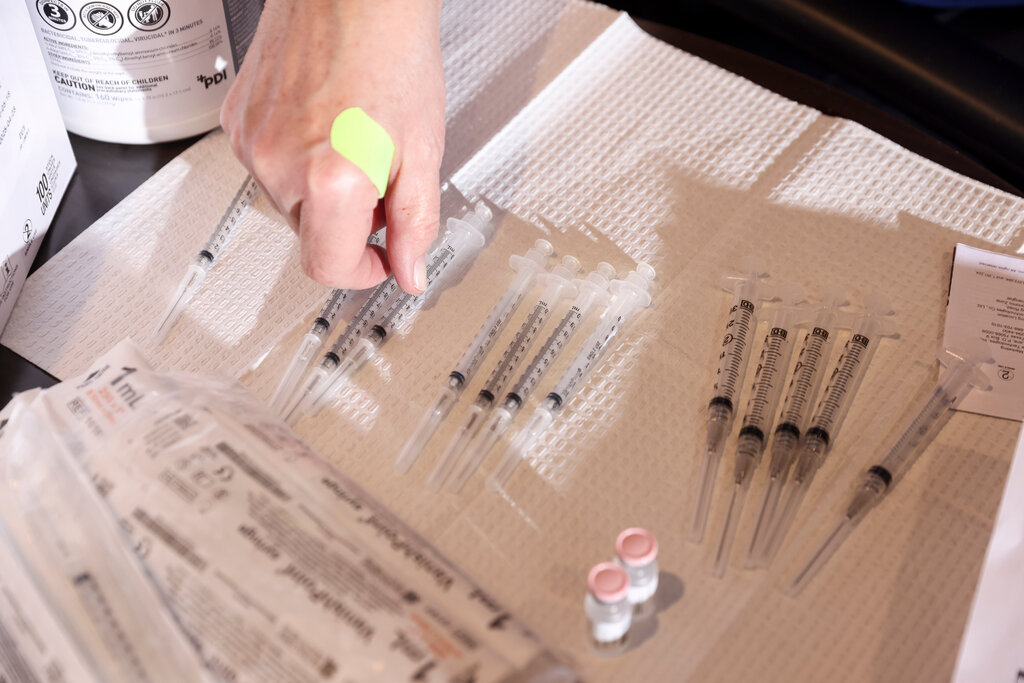 Multiple healthcare workers in Alaska were hospitalized on Tuesday with a ‘serious allergic reaction’ after receiving Pfizer’s COVID-19 vaccines, according to the mainstream media reports.

The person, who had no known drug allergies, was still in the hospital on Wednesday morning under observation, according to the report. It is unknown whether they suffer from any other types of allergies.

The Alaska resident’s reaction was reportedly similar to anaphylactic reactions two heal workers in Britain experience after receiving the Pfizer-BioNTech vaccine last week – both of whom have recovered.

Of note, they both had a history of severe allergies. One, a 49-year-old woman, is allergic to eggs (which Pfizer says are not in their vaccine). The other, a 40-year-old woman is allergic to several different medications. Both routinely carry EpiPenn-like devices in case of reactions.

After the workers in Britain fell ill, authorities there initially warned against giving the vaccines to anyone with a history of severe allergic reactions. They later clarified their concerns, changing the wording from “severe allergic reactions” to specify that the vaccine should not be given to anyone who has ever had an anaphylactic reaction to a food, medicine or vaccine. That type of reaction to a vaccine is “very rare,” they said. –NYT

No serious adverse effects were reported during Pfizer’s US trial involving over 40,000 participants, aside from aches, fevers and other ‘minor’ side effects.

As Bloomberg notes, the first hiccups in the distribution of Pfizer’s vaccine are just beginning – including a holdup on the delivery of 3,900 shots to two states, and the announcement that roughly 900,000 fewer doses would be delivered next week than were shipped this week.

Four delivery trays of the Pfizer-BioNTech SE vaccine were pulled back from delivery to California and Alabama this week and sent back to the company because they were colder than anticipated, according to Gustave Perna, the army general who serves as Operation Warp Speed’s chief operations officer.

Each of the trays can likely be used to vaccinate 975 people. Pfizer has said its formula needs to be stored at 70 degrees below zero Celsius, the equivalent of negative 94 degrees below zero Fahrenheit. These trays were found to be much colder, according to Perna. –Bloomberg

“We were taking no chances,” said Perna during a Wednesday news briefing.

The Pfizer doses are shipped in temperature-controlled containers developed by company engineers, each of which are equipped with GPS tracking “for continuous, real-time location and temperature monitoring,” per the company.

Meanwhile, roughly 2 million doses of the Pfizer vaccine will ship next week in the US, which is 900K less than the 2.9 million doses available this week. Health and Human Services secretary Alex Azar acknowledge the production hiccups, saying “As you know, they ended up coming short by half of what they thought they’d be able to produce and what they’d announced they’d be able to produce” in 2020.

“They’re right now producing at their maximum capacity to deliver on the 100 million that is in the first tranche of the contract with us, and we’re providing manufacturing support,” Azar added.

And on Tuesday, Florida Governor Ron DeSantis said that shipments of hundreds of thousands of doses were held up due to “a production issue with Pfizer.”

The company pushed back, with spokeswoman Amy Rose saying that the company “has not had any production issues with our COVID-19 vaccine, and no shipments containing the vaccine are on hold or delayed,” adding “We are continuing to dispatch our orders to the locations specified by the U.S. government.” – ZeroHedge

It seems that these adverse reactions are not unique to a singular group of people, or a specific location where the vaccines were released…

Yesterday, we posted a video about a nurse who collapsed after getting a jab of Pfizer COVID19 vaccine. The event was caught on TV…

Worse, is when the “experts” are themselves confused about what they are dealing with…

Two British people with severe allergies apparently had allergic reactions to Pfizer/BioNTech’s COVID-19 vaccine, raising questions about whether it is safe for people with preexisting allergies.

In response, British regulators advised those with severe allergies to avoid the vaccine.

It was not immediately clear what triggered the allergic reactions. Unlike some vaccines, in the Pfizer/BioNTech vaccine there are no preservatives or egg products, which have been known to trigger reactions with other types of vaccines.

One thing that deters us from ever trusting the mainstream medical practice is the propensity to cover up “glitches” such as these.

Both the FDA and CDC will almost always try to downplay all reports that potentially hurt the bottomline of pharmaceutical companies making these biochemical products that don’t really address the problem.

Based on our own independent research and actual experience, allergies are caused by viruses that overload and cripple the auto-immune system from functioning normally, and no drugs can ever do the job beyond masking the symptoms. This means that those COVID19 vaccines, or any biochemical drugs, administered to the population will just aggravate these underlying conditions, or create new problems in the future.

We don’t need to say it, but the vaccines themselves can be the source of those viruses that trigger autoimmune responses we call allergies, as discussed above.

However, if a non-drug antiviral protocol is used, these allergies will just go away for good. That’s because the autoimmune system will just return to its normal state on its own, when all of the adversarial microorganisms are eliminated.

It’s absolutely illogical to protect yourself from any viral infections by puncturing your first barrier to infection with the same viruses that you’re trying to avoid from. But what always astounds us is when people just keep on falling in the same trap over and over again. Haven’t we learned anything yet?