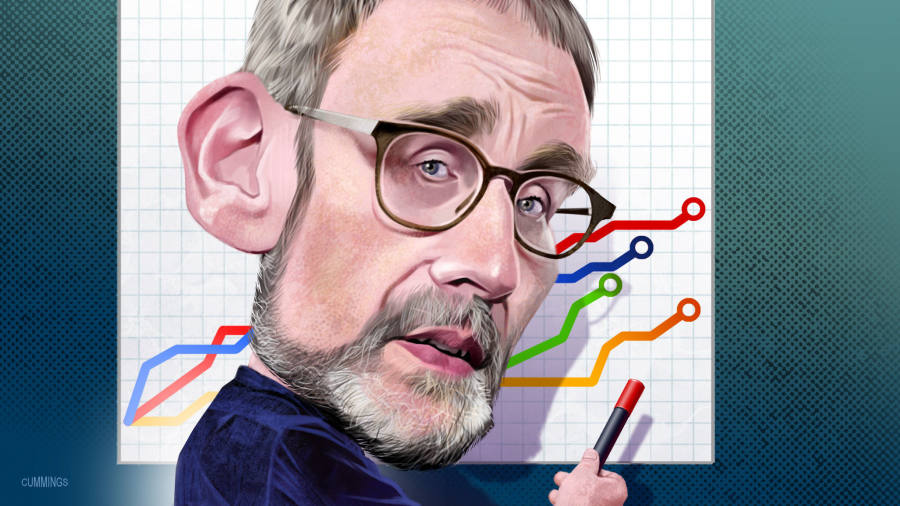 He’s Neil Ferguson: the ghost in the machine. Why do governments salute when he predicts a pandemic and tells them to lock down their countries?

Does anyone care about his past?
Why does he still have a prestigious job?
Who is he connected to?

Let me briefly clear away a bit of refuse and garbage. You can read articles about how computer predictions aren’t really meant to be precise, about how the COVID model to which the US and UK and other nations are surrendering has been walked back, or hasn’t been walked back.

The essence of these articles is nonsense. Why? Because governments are obeying a model. They’re obeying the highest number-projections of deaths…and that is the devastating point.

Neil Ferguson, through his institute at London’s Imperial College, can call the shots on a major percentage of the global population.

He’s Mr. Genius, when it comes to projecting computer models of epidemics.

Fellow experts puff up his reputation.

According to the Business Insider (4/25), “Ferguson’s team warned Boris Johnson that the quest for ‘herd immunity’ [letting people live their lives out in the open in the UK] could cost 510,000 lives, prompting an abrupt U-turn [massive national lockdown in the UK]…His simulations have been influential in other countries as well, cited by authorities in the US, Germany, and France.”

Not only cited, not only influential, but swallowed whole.

Business Insider continues: “On March 23, the UK scrapped ‘herd immunity’ in favor of a suppression strategy, and the country made preparations for weeks of lockdown. Ferguson’s study was responsible.”

So let’s look at Ferguson’s track record, spelled out in the BI piece:

“Ferguson co-founded the MRC Centre for Global Infectious Disease Analysis, based at Imperial, in 2008. It is the leading body advising national governments on pathogen outbreaks.”

“It gets tens of millions of dollars in annual funding from the Bill & Melinda Gates Foundation, and works with the UK National Health Service, the US Centres for Disease Prevention and Control (CDC), and is tasked with supplying the World Health Organization with ‘rapid analysis of urgent infectious disease problems’.”

Gates wants a COVID vaccine before all aspects of planetary lockdowns end. The lockdowns, of course, are already making a wreck of the Earth’s economies.

Recently, Gates sweetened the World Health Organization (WHO) pot by tossing in $350 million to “fight the coronavirus”—thus tightening his control over WHO. He has already pledged $10 billion over the next decade, to various organizations, for vaccine development and use on the world population.

Ferguson supplies a frightening computer projection of COVID deaths—to the CDC and WHO. Ferguson thus communicates a rationale for the Gates vaccine plan.

The CDC and WHO act, based on what Gates wants, as expressed by Ferguson.

National governments surrender to WHO and CDC. LOCKDOWNS.

THE STRUCTURE OF A GIGANTIC HIT.

“Michael Thrusfield, a professor of veterinary epidemiology at Edinburgh University, told the paper he had ‘déjà vu’ after reading the [Ferguson] Imperial paper [on COVID], saying Ferguson was responsible for excessive animal culling during the 2001 Foot and Mouth outbreak.”

“Ferguson warned the government that 150,000 people could die. Six million animals were slaughtered as a precaution, costing the country billions in farming revenue. In the end, 200 people died.”

“Similarly, he [Ferguson] was accused of creating panic by overestimating the potential death toll during the 2005 Bird Flu outbreak. Ferguson estimated 200 million could die. The real number was in the low hundreds.” HELLO?

So you have to ask yourself, why would anyone believe what Ferguson has been predicting in this COVID hustle?

Are his fellow experts that stupid?

Are presidents and prime ministers that stupid?

And the answer is: This is a monumental covert op; some people are that stupid; some are caught up in the op and are afraid to say the emperor has no clothes; some are aware of what is going on, and they want to destroy national economies and lead us into, yes, a new world order.

In particular, never forget the World Health Organization is an action arm of the United Nations, which has issued blizzards of reports, position papers, and press releases advocating a borderless and technocratic planet, surveilled and operated more or less as a giant corporate entity—where every citizen, for his own good, for protection against future pandemics, will be fitted irretrievably into a controlled slot.

The grand total of slots will form a “sustainable civilization,” minus:

Freedom in all its expressions—movement, dissent, assembly, etc.—must be made extinct. Otherwise, viruses, on the loose, will infect and destroy us all. That’s the polished spear-point of official propaganda.

Gates knows he has his man: Ferguson. As the recipient of tens of millions of dollars a year from the Gates Foundation, Ferguson isn’t about to issue a model that states: COVID is nothing to worry about, let people live their lives and we’ll be all right. The chance of that happening is on a par with researchers admitting they never properly identified a new virus as the cause of illness in 2019, in Wuhan.

In order to justify injecting every man, woman, and child in the world with heavy metals, synthetic genes that alter genetic makeup, a host of germs, and who knows what else, Gates needs A STORY ABOUT A DEADLY VIRUS THAT NECESSITATES SHUTTING DOWN AND IMPRISONING THE PLANET, ACHIEVING A CAPTIVE AUDIENCE.

He’s got the story, all dressed up in a computer model, composed by a man with a past record of abject and devastating failures.

Neil Ferguson is the ghost in the machine. The machine is the World Health Organization and the CDC. The man behind the ghost is Bill Gates.

Jon Rappoport has worked as a free-lance investigative reporter for over 30 years. You can find this article and more at NoMoreFakeNews.