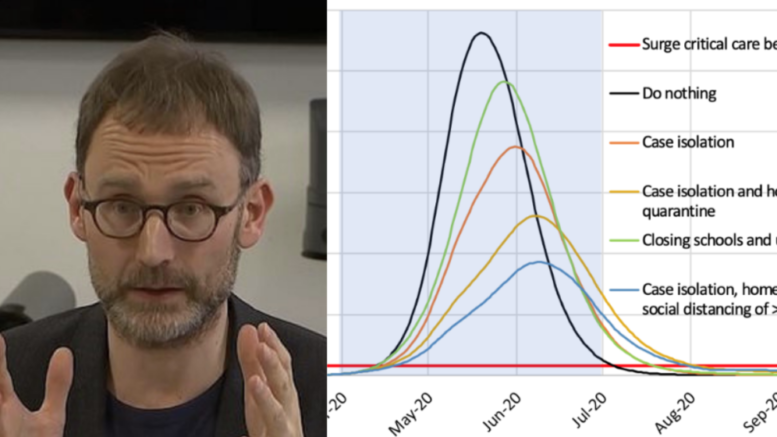 A few weeks ago our party assembled a team to audit pandemic models that are being used to inform public policy. Team members have a mathematics and programming background, enabling them to examine whether these models’ assumptions are valid.

As part of this independent work, our team has provided input to University College London’s Tim Colbourn on his draft paper on mass-testing in the UK. We also contacted Neil Ferguson of Imperial College and asked him whether he had looked at the option of isolating the elderly as part of his model. I have alluded to his response in an earlier article.

Neil Ferguson has provided his model and source code to a few independent experts. We understand from news reports that he expects to publish it soon on Github, which will enable our team to more thoroughly examine his model.

In the meanwhile, Nirmesh Mehta from our team has made a few observations about the Imperial College model that I believe are worth sharing at this stage to inform public debate.

The 16 March 2020 Imperial College paper, entitled, Impact of non-pharmaceutical interventions (NPIs) to reduce Covid-19 mortality and healthcare demand, has been one of the most influential papers in shaping policy responses to the Covid-19 pandemic. More than 40 days after it was published, we are in a better position to judge the accuracy of its predictions.

In the last 44 days, the pandemic has spread throughout the world. Most countries have responded in a manner advocated by the paper, even as Sweden has been a high-profile outlier, guided by its own experts, Johan Giesecke and Anders Tegnell.

With the development and large-scale deployment of antibody testing, we have more accurate information regarding the spread of the pandemic. Antibody testing has shown that a much larger number of individuals have been exposed to Covid-19 than previously believed, and possibly earlier than previously understood. This could have two implications: (a) the mortality rate could ultimately be lower, somewhere in the range of 0.2% to 0.6%; and (b) R0 could ultimately be higher, possibly between 2.6 and 3.

Sweden has been able to moderate the increase in deaths in Stockholm after an initial spurt of deaths in aged care homes. The number of its new cases is plateauing. This may have the following implications, that (a) isolating the elderly is a viable strategy, particularly if more resources are deployed towards that purpose; and (b) most of the mortality and healthcare overburdening risk comes from high risk clusters about which we now have more information and can therefore plan better.

The high-level implications of this new information on Imperial College model projections could include the following, that (a) in the absence of any intervention, healthcare facilities would have been overwhelmed only for short amounts of time initially; and (b) much less intrusive, but targeted interventions could have led to similar results to what we are seeing now, with lockdowns.

The Imperial College paper was not peer reviewed. The simulation and programming that it relies on has not yet been published in the public domain. Given that its recommendations were at variance with the then prevailing policy in the UK, a very low bar seems to have been set by the international scientific community on its wide acceptance. In retrospect, emergency situations like this pandemic should require a far higher – and not lower – level of scrutiny since policy responses on the basis of such papers can have huge financial and health impacts.

Further, while it is not a shortcoming of the paper per se, an issue has emerged regarding the democratic political process. Apart from our political party, no party in India or elsewhere seems to have asked serious questions about this or other models. This suggests a need for democracies to strengthen their critical thinking capacity by creating an independent “Black Hat” institution whose purpose would be to question any technical (mathematical) foundations of government decisions.

The Imperial College paper is a one-sided analysis. It looks at the benefits of a lockdown without going into the costs. It also considers each death to be equal to any other death.

We all accept a significant number of traffic deaths in order to reach our destinations faster. Our responses to various diseases including influenza are much less severe. In each of these cases we implicitly (or explicitly) perform a cost-benefit analysis and agree that a human life can be “traded” (in the policy sense) against some benefits to society that are compared in economic terms. At a minimum, we look at current patterns of behaviour and expectations and examine current trade-offs.

The second issue is whether all lives are equal. Taking a binary approach here leads to significant risk of bias while attributing mortality to the pandemic. This has grave implications particularly during the current pandemic which has very high mortality rates for the elderly and for those with complications, a good fraction of whom may have otherwise died within a few months even without this pandemic (as has been reported to be the case in some nursing homes in the West).

Once the detailed Imperial College model and its assumptions are published, our team will further examine whether the model was fit-for-purpose. For instance, we now know that this virus behaves in some ways like flu, not like SARS. In the case of SARS, most patients were not that contagious until around a week after symptoms appeared. That enabled contact tracing and isolation strategies to be applied to contain and ultimately eradicate the virus. But a vast proportion of Covid-19 patients can transmit the virus even when they are not symptomatic. This has implications for the modelling approach.

The WHO in its October 2019 report entitled, Non-pharmaceutical public health measures for mitigating the risk and impact of epidemic and pandemic influenza, looked at the entire scientific literature and rejected contact tracing and quarantine of exposed individuals (i.e. lockdowns) as a policy option for severe flu pandemics.

It needs to be examined closely Neil Ferguson and his team should have paid more regard to these well-established pre-2020 scientific learnings that apply to flu-like pandemics such as this one. Given the information at hand, we have reason to believe that epidemiologists in Sweden have applied the more robust and justifiable scientific approach.

Bala Srinivasan for Times of India