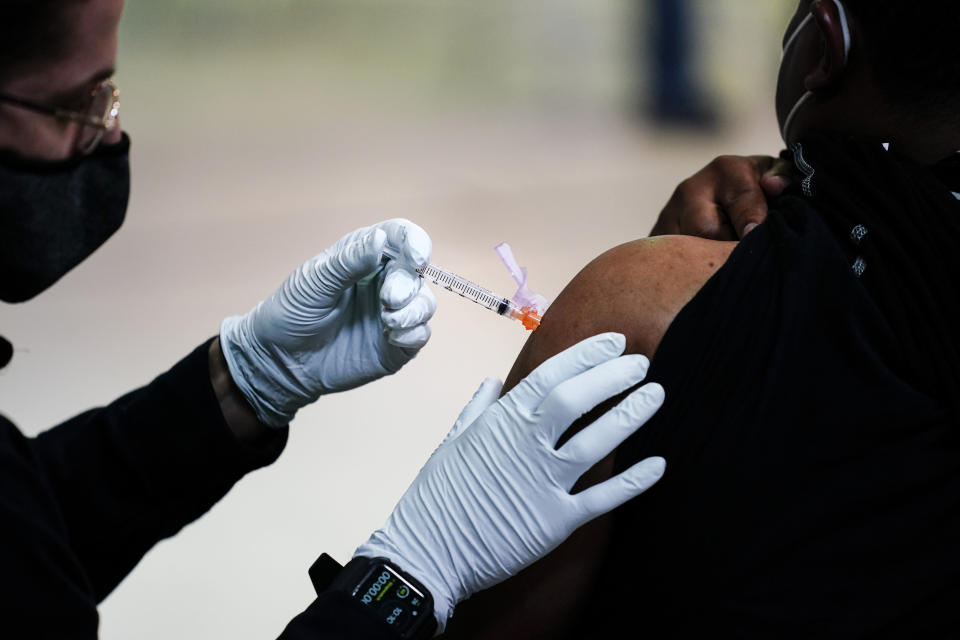 A mass vaccination site in Colorado was shut down and 600 people with appointments turned away after 11 people experienced reactions, but state officials say side effects were “consistent with what’s expected.”

More than 600 people with appointments were turned away from a mass vaccination site in Commerce City, Colorado, after several vaccine recipients suffered adverse reactions to the Johnson & Johnson (J&J) one-shot COVID vaccine.

Centura Health, which helped run the community vaccination center at Dick’s Sporting Goods Park, said in a statement posted to Twitter that 11 patients who received the vaccine experienced adverse reactions. Two people were transferred to the hospital after medical staff determined they required additional observation. Centura officials did not specify what reactions were observed or their severity.

“Following the administration of the Johnson & Johnson vaccine and during onsite observation, we saw a limited number of adverse reactions to the vaccine,” Centura Health officials said. “We followed our protocols and in an abundance of caution, made the decision — in partnership with the state — to pause operations for the remainder of the day.”

The 640 patients who were turned away were automatically rescheduled for another vaccine clinic on Sunday, April 11, Centura Health said. The site will administer Pfizer doses, which were previously scheduled for use for Sunday’s appointments at the Dick’s Sporting Goods site.

In a separate statement, state officials said there is no reason for others who were vaccinated at the site on Wednesday to be concerned.

Scott Bookman, COVID-19 Incident Commander, said he knows it can be alarming to hear about people getting transported to the hospital, but wanted to reassure Coloradans that the Centers for Disease Control and Prevention (CDC) closely monitors authorized vaccines and the side effects were consistent with what can be expected.

Between March 2 and March 26, VAERS data showed 518 reports of anaphylactic reactions to J&J’s COVID vaccine, which is distributed under the company’s Janssen subsidiary. There were also seven cases of Bell’s Palsy reported during the same period.

J&J’s vaccine was granted Emergency Use Authorization by the U.S. Food and Drug Administration (FDA) on Feb 27. As The Defender reported, days later J&J revealed plans to test its one-shot vaccine on infants, including newborns, pregnant women and the immunocompromised. The expanded clinical trials were laid out in the company’s application for emergency use approval and in briefing materials provided to the FDA and discussed briefly during the meeting.

According to FDA analysis, J&J’s vaccine consists of a modified adenovirus vector like that used in AstraZeneca’s COVID vaccine, as opposed to the mRNA technology used by Moderna and Pfizer.

On Wednesday, EU Regulators confirmed a ‘possible link’ between AstraZeneca and blood clots resulting in suspension of AstraZeneca’s vaccine in younger populations in many European countries and guidance in the UK that the vaccine not be used in people under 30.

The European Medicines Agency said Wednesday during a press conference that it is also looking carefully at the J&J vaccine, as three cases of blood clots associated with low platelets, similar to the cases reported after AstraZeneca vaccines, have been reported, as well as one instance of thrombosis in a clinical trial.

Although the FDA identified no safety concerns with J&J’s COVID vaccine, The Defender reported in October 2020 that the company temporarily paused phase 3 clinical trials of its COVID vaccine after one participant experienced an “unexplained illness” believed to be connected to the experimental vaccine.

At the Oct. 30, 2020, Advisory Committee on Immunization Practices meeting, J&J’s Dr. Jerald Sadoff was pressed by no fewer than six committee members to reveal the illness. He refused, citing confidentiality.

A coronavirus vaccine site in Georgia became the fourth US location this week to pause its administration of the Johnson & Johnson jab after concerns over possible adverse reactions, a report said.