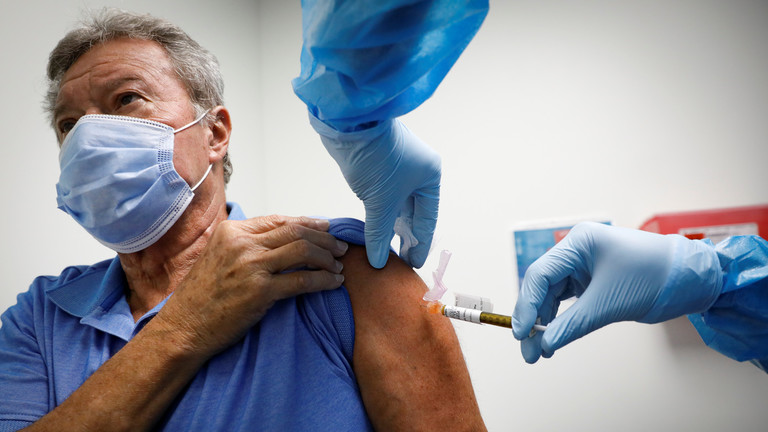 With half the US population reportedly unwilling to submit to an experimental Covid-19 shot, a new scientific paper has shed light on how state health authorities might enforce compliance with vaccine mandates.

Published in the New England Journal of Medicine on Thursday, the paper outlines strategies for circumventing widespread fears over the safety of a rushed-to-market vaccine against the novel coronavirus, providing health authorities with a playbook for coercing a skittish populace.

As Covid-19 continues to exact a heavy toll, development of a vaccine appears the most promising means of restoring normalcy to civil life. Perhaps no scientific breakthrough is more eagerly anticipated. But bringing a vaccine to market is only half the challenge; also critical is ensuring a high enough vaccination rate to achieve herd immunity. Concerningly, a recent poll found that only 49% of Americans planned to get vaccinated against SARS-CoV-2.1

One option for increasing vaccine uptake is to require it. Mandatory vaccination has proven effective in ensuring high childhood immunization rates in many high-income countries. However, except for influenza vaccination of health care workers, mandates have not been widely used for adults.


The writers acknowledge that voluntary measures should be tried first, rather than mandating the vaccine for everyone out of the gate. However, if the target population doesn’t comply within a trial period, a mandate should be rolled out, and the penalties for refusing to submit should be harsh. Given “the costs of a failed voluntary scheme,” the writers warn, authorities should wait no more than a few weeks before rolling out a mandate if uptake falls short of expectations.

The paper says “six substantive criteria” must be met before a Covid-19 vaccine is imposed by the state. A federal body, the Advisory Committee on Immunization Practices, must greenlight administration to certain groups of the populace first, and “only recommended groups should be considered for a vaccination mandate.”

“High-risk” groups should be given priority on that list.

“[T]he elderly, health professionals working in high-risk situations or working with high-risk patients…persons with certain underlying medical conditions,” and people living in “high-density settings such as prisons and dormitories” – as well as active-duty military service members – should be ordered to get the jab as soon as health officials are confident they have a sufficient supply to cover these groups, the paper suggests.

Rather than attempting to pass laws requiring certain populations to get the vaccine, the paper recommends that “noncompliance should incur a penalty” – and a “relatively substantial” one. The non-compliant should be threatened with “employment suspension or stay-at-home orders,” though fines or criminal charges are discouraged, because they “disadvantage the poor” and risk getting the mandate itself challenged in court. Worse, they “may stoke distrust without improving uptake,” it adds.

Whatever they do, authorities should avoid flaunting their relationship with vaccine manufacturers, the paper recommends – a tall order, given that President Donald Trump’s “Operation Warp Speed” vaccine development initiative is helmed by Moncef Slaoui, the former head of pharma giant GlaxoSmithKline’s vaccine division who had to quit the board of directors of Moderna – a frontrunner in the vaccine race – to take the job. Slaoui notoriously was forced to offload over $10 million in Moderna stock after its value briefly skyrocketed following the announcement of promising early trial results.

For the non-high-risk groups, the writers suggest authorities “encourage voluntary uptake…using means such as public education campaigns and free vaccination.” Health officials have been hard at work conducting focus groups on which variety of “influencers” might best convince the American people to embrace what would be the quickest vaccine rollout in history (the standard timetable for vaccine development and approval, complete with post-shot monitoring for side effects, is 10 years or more) and what kind of emotional tone the message should take.

A Yale University study conducted in July evaluated messaging strategies including guilt, economic benefit, trust in science, embarrassment, and community benefit to measure the effects on not only confidence in the vaccine itself but how willing the participants were to persuade others to take the shot – and how much they feared or looked down on those who had not received it. The results of that study have not been published.

The authors of the NEJM paper hail from Yale, Stanford University, and Indiana University, all institutions that have received funding from the Bill and Melinda Gates Foundation. The foundation has poured billions of dollars into developing multiple Covid-19 vaccines, setting up seven facilities to manufacture the leading candidates. While the US, UK, and several other countries have already paid for hundreds of millions of doses of multiple jabs, no western pharmaceutical company has yet declared victory in the vaccine race – on the contrary, the clinical trials of frontrunners like AstraZeneca and Moderna have yielded a bumper crop of troubling side effects.

Fears about the rushed rollout of the vaccine coupled with both Republicans and Democrats’ determination to turn the jab into a political football have convinced a majority of Americans that they don’t want to be among the first to get vaccinated. A poll conducted earlier this month suggested less than half the country would take the shot, even if they were paid $100, and polling shows the portion of Americans willing to take it has declined steadily since May. – Main text by RT.com