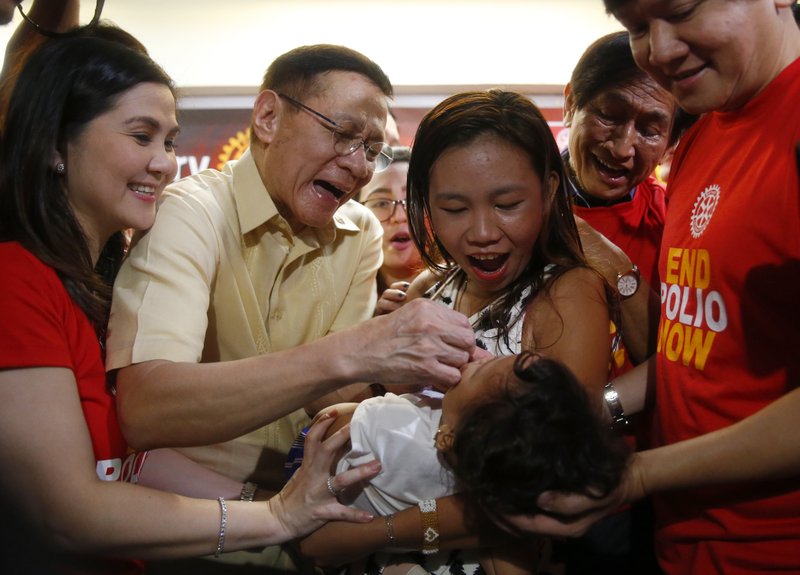 For decades, polio vaccination has been one of the most glorified aspects of Modern Medicine. It is the default counterargument when questions are raised regarding the glaring adverse effects and deaths resulting from subsequent vaccination programs.

Although long in coming, this recent polio epidemic just proves that we cannot eliminate the virus by simply injecting the same virus into our children. That’s simply too illogical.

Worse, the shift from injection to oral administration of the polio vaccine exposes the rest of the unvaccinated population to the virus, thereby ensuring that the same virus will never go away, but will only mutate into something far more virulent than the original strain. This has been confirmed recently by the Philippine Department of Health and World Health Organization [WHO].

The World Health Organization and the United Nations Children’s Fund expressed deep concern over polio’s reemergence in the country and said they would support the government in immunizing children, who are the most susceptible, and strengthening surveillance.

“As long as one single child remains infected, children across the country and even beyond are at risk of contracting polio,” UNICEF Philippines representative Oyun Dendevnorov said.

WHO and UNICEF said in a joint statement the polio outbreak in the Philippines is concerning because it is caused by vaccine-derived poliovirus type 2.

Within that same report is a one-liner that summarizes the bleak situation as far as public health in the Philippines is concerned, i.e.,

There is no known cure for polio, which can only be prevented with vaccines.

Duque said his department will launch a mass vaccination campaign next month for children under age 5, starting in the Manila metropolis, Lanao del Sur and Davao, where the virus was detected.

The Philippines’ public healthcare system is an exact copy of the Western healthcare system. It is fully controlled by big pharmaceutical companies, i.e. from the top echelons of the bureaucracy, down to the last medical consultants and laboratories hired by the government to verify drug safety and efficacy, all of them are receiving some form of compensation on a regular basis, as revealed during the Senate Blue Ribbon Committee’s Dengvaxia investigations late 2017.

Sanofi’s Dengvaxia mass vaccination in the Philippines has led to the inoculation of 834,000 schoolchildren of uninformed parents, and 600+ subsequent deaths sharing the same symptoms.

The fatalities had internal bleeding, enlarged organs and petechial rashes. One of them died within 24 hours after experiencing dengue symptoms, he told radio DZMM. – ABS-CBN News

Notably, the DOH and WHO quickly raised the bar of their vaccination campaigns to arrest the growing public concern about all things vaccination. This is the time that the WHO issued a widely publicized report containing the phrase “vaccine hesitancy” as one of the greatest threats of humanity today, which was then followed by the fearmongering resurgence of measles epidemic.

Now, they are reviving the need for Salk’s veritable polio vaccine, even when they know that it was the virus in the vaccine itself, which is the root cause of the current “epidemic.”

The WHO and UNICEF said that “at least 95% of children under age 5 need to be vaccinated to halt the spread of polio in the Philippines.”

It is indeed hard to understand why the so-called experts will keep on recycling the old questionable methods of dealing with viral mutation when more logical approaches are present.

The only possible explanation behind this idiotic behavior is because the goal is not about the full eradication of the virus itself, but to sustain the cash flow for the vaccine manufacturers and those who have benefited largely by selling the scam to their own government.

In the draft committee report, the Blue Ribbon found President Benigno Aquino III, former Health Secretary Janette Garin, former Budget Secretary Florencio Abad, PCMC Director Julius Lecciones and other officials of the Department of Health and the Food and Drug Administration liable for violating several sections of Republic Act 3019 or the Anti-Graft and Corrupt Practices Act and other laws in connection with the procurement and distribution of the Dengvaxia vaccine.

The World Health Organization, on the other hand, is nothing but a glorified NGO that has nothing to do with real healthcare at all, but is serving only the profit motive of big corporate interests.