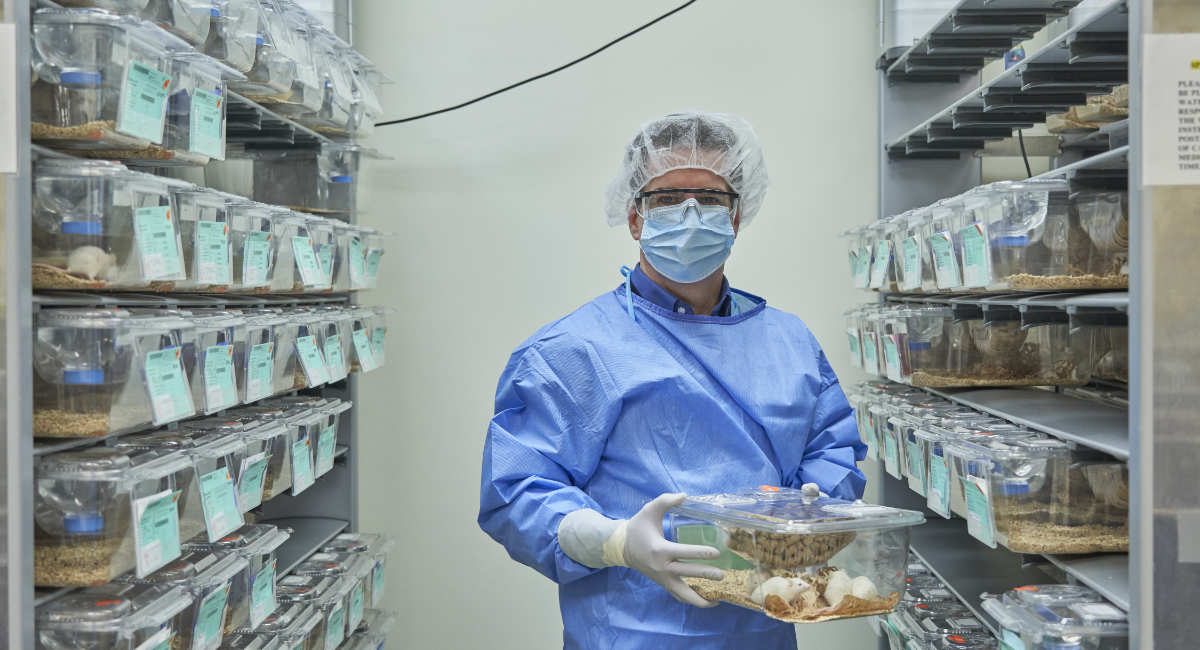 Vaccine development and mass production involve the use of aborted fetus. It provides the initial “host” services to the specific virus that makes vaccine for what they claimed it is — “an agent that resembles a disease-causing microorganism and is often made from weakened or killed forms of the microbe.” More than its conflicting and deceptive definition, the issue at hand is how they dehumanized an entire fetus to a mere “tissue” and more.

E-mail communications recently obtained from the U.S. Food and Drug Administration (FDA) reveal that the agency has spent tens of thousands of taxpayer dollars to purchase human fetal tissue for the creation of “humanized mice.”

The disturbing e-mail exchanges between FDA research veterinary medical official Dr. Kristina Howard and Perrin Larton, a procurement manager at the California-based Advanced Bioscience Resources (ABR), took place from January 2011 to April 2018. The e-mails were obtained by Judicial Watch as a result of a Freedom of Information Act (FOIA) lawsuit.

Perhaps most striking about the conversations is the manner in which once living human babies — violently killed by abortion at various abortion businesses across the country — were dehumanized and reduced to mere “tissue” or body parts.

In the subject column of the e-mails was the acronym “HFT,” which stands for “human fetal tissue.” While the lives of the babies were never discussed in the e-mails, organs obtained from once live children were described as “tissue,” and included such descriptors as “beautiful.” Grief was only expressed in the e-mails when such “tissue” had been rendered unusable.

The 2012 contract between the FDA and ABR indicated that human fetal tissue (thymus/liver) from aborted babies between 16 and 24 weeks was to be sent twice monthly and shipped “fresh” on “wet ice.” Live Action News previously documented past accusations of live aborted fetuses being shipped on ice for research here. A June 18, 2018, e-mail revealed ongoing purchase orders were written for “sets of tissue.”

On May 9, 2013, Howard complained to Larton that because FedEx had X-rayed packages containing fetal organs, “the tissues could not be used.”

Larton responded, “DAMN … they were wonderful tissues. I procured them! I’m training a new tech in Minneapolis and I told her how important it is to put the DO NOT X-RAY stickers on the package. Of course if you have an IMBECILE on the FedEx side… but then, now it’s a moot point.”

Howard replied, “Yes, we were absolutely heartbroken.  They were beautiful tissues and to lose them like that was awful.”

The overriding concern was not the baby from whom the “tissue” had come but whether or not the “tissue” would arrive in time to be surgically implanted on the mice. When “fresh tissue” was not available, “frozen tissue” was sometimes used but the e-mails noted that “fresh” was preferred.

On August 5, 2016, an unidentified person informed Howard and ABR that they were “not able to procure for you today.” Howard replied, “Given how old the mice are (12 weeks) we will use frozen tissue. Fresh tissue is always our preference, but I don’t think we can wait another week. We are going to receive more mice in early Sept so we will try for more tissue then….”

Larton responded, “It’s so frustrating. We’re also working with a new doctor in one of the busiest clinics … not a good combo! The tissue is awful!”

A May 25, 2017, e-mail indicated “HFT” tissue would be needed when “mice needed to be made” or the lab was about to get a shipment of mice for “surgery.”

July 2015, Howard pressed Larton for “tissue’ because, she claimed, “we have one last group that is approaching ‘too old’ to do surgery on….”

On July 13, 2015, Larton complained about a slow day at an abortion facility, writing, “Last week was very strange. One clinic where traditionally they do 30-45 surgeries on their surgery day… had 13. Amazingly slow. I’ll prioritize your request… since your mice are rapidly aging out!”

On January 17, 2015, Larton had explained to Howard that “tissue availability varies from week to week.”

And on January 28, 2015, Larton wrote, “…We only had one clinic with 2nd trimester tissue today. We’re working with two clinics in the Philadelphia/New Jersey area and due to the storm … they didn’t have clinic yesterday or today. We’re hoping for better tomorrow…”

In 2012, Larton explained why the sex of the baby may difficult to identify — in short, because an abortion tears apart a preborn child: “The techs were not able to identify the gender. We only can check external genitalia and if it’s not there… due to the nature of the termination procedure… we have no way of telling.”

On June 9, 2016, Howard told Larton, “We have a very important and timing-wise, challenging surgery the week of June 20th. We will be making dual humanized BLT mice (human liver and the BLT surgery) at the same time. This requires coordination of tissue from ABR and the hepatocytes. We prefer male tissue for this delivery…”

Larton replied, “Does the tissue HAVE to come from a male fetus?  It really helps when we can send either, especially since this is an important and time sensitive surgery.”

“It is strongly preferred to have a male fetus if at all possible,” Howard told Larton.

“However, after we dose the mice, we have to proceed with the surgery, so at that point undetermined sex or female is better than no tissue. I know in some cases it is impossible to tell what the sex is, however, I don’t know what proportion of your tissues are in that category. Okay, given all information, let’s go with either… As always liver and thymus tissue… As you say, getting the tissue is most important so we don’t lose the animals in this surgery…” Howard wrote.

E-mails expose frustration over Jewish holidays and use of digoxin

On September 22, 2017, Larton wrote to Howard, “…The specimen is 15 weeks. Due to the Rosh Hashanah holiday… the clinics were closed yesterday … so no real large tissue today…”

Howard responded, “Understood. I didn’t realize the holiday would interfere with clinic operations…”

Larton then replied, “We didn’t either… but… many of the doctors are Jewish!”

Another complaint centered around the use of digoxin, a chemical used to stop the preborn child’s heart, which can sometimes fail to kill the baby and harm the mother.

A video released by Pro-Life San Francisco claimed preborn babies used in fetal tissue experiments are generally not given digoxin prior to being dismembered during abortions because the “feticide severely compromised the quality of the fetal tissue.”

On July 22, 2016 Howard asked Larton if she knew “about tissue for tomorrow.”

Larton responded, “HI Kristina, Nothing today. We had an afternoon clinic in NJ and were hoping for the best, but nothing. This week I’m working with a doctor who induces fetal demise at 20 weeks. The other doctors who staff this clinic don’t induce fetal demise until 22 weeks… and of course… this week we had 4 21 week cases that all had been injected with digoxin on Wednesday so the tissue is unusable. I’ll have you on next week and will prioritize your request. Perrin”

Judicial Watch President Tom Fitton said the documents, which shock the conscience, claimed to “show potentially illegal use of tax dollars to purchase organs of the unborn killed through abortion.”

This is the third set of records released by Judicial Watch as the result of its March 2019 lawsuit.

Judicial Watch and annotated by LiveAction.org

The accelerated production of COVID19 vaccines should increase the demand for the “tissue”, right?

Probably, but they’re going for the jugular now — edit your body with mRNA gene modification therapy to produce your own toxin!

The problem is that in the case of Moderna and Pfizer, this is not a vaccine. This is gene therapy. It’s a chemotherapy agent that is gene therapy. It is not a vaccine. What is this doing? It’s sending a strand of synthetic RNA into the human being and is invoking within the human being, the creation of the S1 spike protein, which is a pathogen. It’s a toxin inside of human beings. This is not only not keeping you from getting sick, it’s making your body produce the thing that makes you sick… a vaccine is supposed to trigger immunity. It’s not supposed to trigger you to make a toxin.

mRNA ‘Vaccines’ Fulfill None of the Criteria for a Vaccine

According to the U.S. Centers for Disease Control and Prevention, a vaccine is:1

Immunity, in turn, is defined as:

That’s the medical definition. The legal definition, in the few cases where it has been detailed, is equally unequivocal:

These definitions, both medical and legal, present problems for mRNA “vaccines,” since:

Would you like to have your own built-in manufacturing plant for toxins right inside your body?

If so, take the mRNA injection today, or…

… stay conventional with aborted fetal “tissue” developed and manufactured vaccines, and most importantly, don’t forget to claim your vaccine passport.