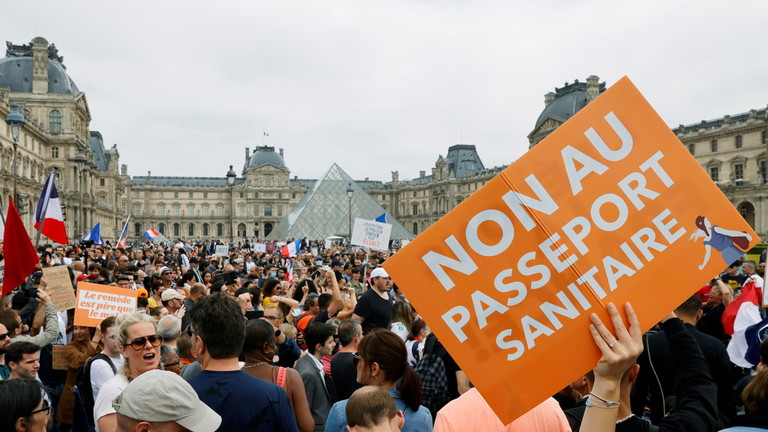 The staff of the hospital in Montelimar, in the French department of Drome, have gone on indefinite strike to protest the new rules demanding they take a vaccine against Covid-19 by mid-September or face losing their jobs.

The strike against “forced vaccination” was announced on Thursday by the CGT-GHPP trade union, and affects some 200 doctors and 1,500 nurses in the southeastern French city.

Hundreds of them gathered outside the hospital on Friday, denouncing lockdowns and vaccine mandates and chanting “liberté!” (freedom).

The French legislature is finalizing the proposal that would require all medical professionals in contact with the vulnerable to be fully vaccinated by September 15, or else lose their salaries and even their jobs.

“We are against mandatory vaccination and vaccine coercion,” Elsa Ruillere, local union representative, told Sputnik France. “There is no choice between tests or vaccination: vaccination is compulsory. No, we don’t agree. We want to have the choice like the rest of the world and we do not want compulsory vaccination.”

Ruillere says her union supports “free and informed consent” and is not against vaccination on principle but is against coercion. Some of the medical workers said they are waiting for the French-made Sanofi-GSK vaccine, promised for December.

“We are well aware of the evolution of the virus. We do not take it lightly,” Ruillere said. However, she and her striking colleagues point out that even with the rise in positive tests for the Delta variant of the coronavirus, there is no commensurate rise in hospitalizations.

“Yes, we turned ‘red’ but that’s in fact due to the positive tests. In terms of hospitalizations, we are fine at the moment, we did not need to reopen beds, we have far fewer hospitalized people than before and fewer people in intensive care,” she added.

Another union gripe is the lack of public debate, since France’s National Assembly seems to have simply proceeded on the advice of the High Health Authority (HAS), which called the vaccination mandate “justified.”

There have been widespread protests in France since mid-July, as the government of President Emmanuel Macron imposed the vaccination mandate on health workers and introduced a  “health pass” requirement to access public venues with more than 50 people in attendance. The pass requirement will extend to cafes, restaurants and shops starting August 1.

There has been a 150% increase in coronavirus cases over the past week in France, attributed to the Delta variant. The government says 96% of those infected are unvaccinated.