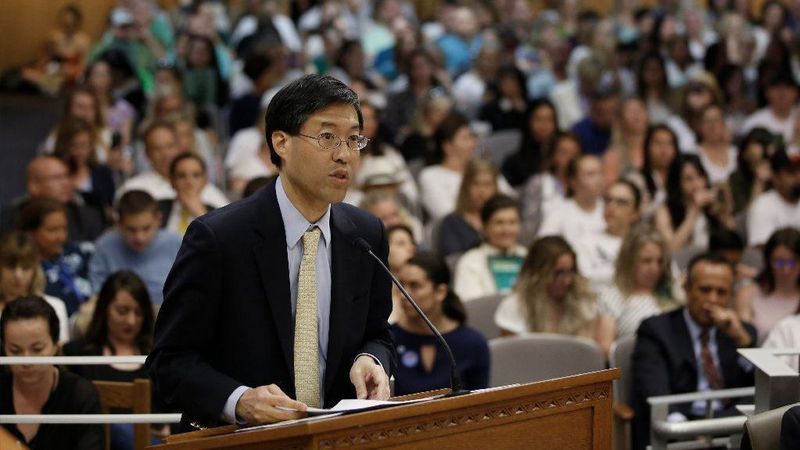 Eugenics via forced vaccination is not a conspiracy theory anymore. It’s already here. Forced vaccination has been done by the Nazis in the 1930s, and now it’s being implemented in America.

The Senate of the State of California has just passed the controversial forced vaccination bill SB276 filed by genocidalist Dr. Richard Pan [D-Sacramento] 24-10. Before the passage of the bill, a stimulated measles outbreak was launched nationwide with only a few victims of weak constitution have succumbed, i.e. 750 diagnosed, 44 cases of which is in California.

The state Senate passed a controversial bill Wednesday to tighten California’s already strict school immunization law, and now the Assembly must weigh the hot-button vaccine proposal that has prompted protests and reports of death threats against at least one lawmaker.

The bill comes amid the worst measles outbreak in more than 20 years, with more than 750 people diagnosed with the disease this year nationwide. Of those, 44 cases have been in California.

California has some of the strictest laws in the country requiring childhood immunizations in order to attend public or private schools. Since a 2015 law, the state has allowed for exemptions from required shots only if a doctor says there is a medical reason to skip some or all of them. Previously, parents could opt their children out of vaccinations by citing a personal or religious belief, as most states allow.

But Pan said doctors are increasingly excusing children from immunizations for questionable reasons, such as for having asthma or diabetes, prompting his proposal to allow the state’s public health department to review and potentially reject existing and newly sought medical exemptions.

Under the bill, the state Department of Public Health would decide whether the underlying condition cited by a doctor in a medical exemption meets guidelines set by the Centers for Disease Control and Prevention.

Medical exemptions that have already been approved would have to be submitted to the state for inclusion in a nonpublic database by the end of 2020.

State health officials estimate that more than 40% of the 11,500 medical exemptions expected to be requested each year would be denied under the bill.

The State of California is obviously taking its cue from the World Health Organization who said a while back that “vaccine hesitancy” is among the top threats to its Eugenics-related objectives. global warming deniers, second, etc.

Again, they use the stimulated “measles outbreak” as the impetus to force vaccinate the population.

Big Pharma is feeling the crunch as more and more people are taking healthcare into their own hands.

Aggravated by lawsuits after lawsuits, the chemical drug manufacturers need to act aggressively now by invoking the power of the State, through its captured legislators like Dr. Pan in empowering the government to enforce legislated mass vaccinations, in spite of the proven, better and commonsensical methods of fighting any and all viral infections that are readily accessible today.

Away from all the limelight, a pediatric clinic is paying $20 for each child who wants to avail of the viruses and chemical toxicity that go with every vial of DTap, PCV, HIB, IPV, and Hep B vaccines. They must complete the listed vaccines to qualify for the bonus.

It’s a sound marketing program, of course, considering that the amount that will be spent when the viruses have done its damage along the way is much higher than what the clinic is spending now.

No, the carrot will not come from the clinic’s cash register, but allocated for by Big Pharma itself within its long term marketing strategy, knowing that most of the time, most parents won’t see the link between the vaccination and the injuries that come in later months and years.

Proving that a cancer is caused by vaccinations in court is a tall order, and only a few brave souls would dare brawl it out with the big law firms.

The Washington State has also passed the same forced vaccination bill in their Senate, as a “rebuke to anti-vaxxers.”

Soon, more States will be using its police powers in forcing vaccinations among its citizens for three main reasons:

I’ve met one of them, a lawyer who asked me this fundamentally myopic question:

“What will happen to the competition, and the meaning of life itself, when all technologies are released that could free the people from their bondage?”

Evidently, some people do value a certain level of hierarchy because they have worked so hard for it for years. They cannot just relinquish their privileged position now. The Pyramid of Vanity must be preserved at all cost.

The bigger picture, of course, is that the State’s power of coercion and corporate finance are driving both the government and the governed to their deaths, because at the end of the day, the awakened population will rise up and will attempt to dissolve the Corporatocracy that enslaved them for far too long.

The Corporation may have overextended its empire. Forced vaccination could be the last straw that breaks the camel’s back.

When all of the long suppressed technologies are finally released to the public, and the monetary system collapses as a matter of consequence, a new kind of competition will emerge, whereby only the individual’s creativity and tangible contribution to our collective societal advancement are the only valid currencies — the primary cause for honor, respect, and public adulation.

Humanity deserves more than the hunger games of the Vatican Corporatists and Khazarian bankers. But power is not given away. It must be taken with force, wits and sheer determination. The “useless eaters” need to act together today, or perish tomorrow.