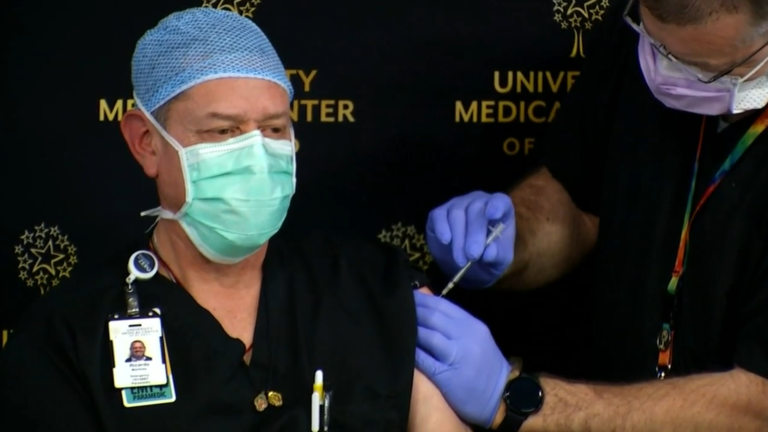 Those who have exposed the use of empty “vaccine” syringe were labeled as “antivaxxers” in retaliation for the botched PR stunt in El Paso, Texas hospital.

The use of empty vaccine syringes in these deceptive exercises is understandable considering the high number of those who have already died, or are still suffering mentally and physically, from the “90% effective” Pfizer COVID19 vaccines, at this very early stage of the global vaccination efforts.

An El Paso, Texas, hospital tried to promote Covid-19 vaccination by turning its first doses into a media event, but the publicity stunt backfired when one of the nurses being inoculated was apparently stuck with an empty syringe.

Video of Tuesday’s vaccinations of five nurses at University Medical Center of El Paso showed the second nurse being jabbed with a needle, but the plunger won’t go down because it’s already at the bottom of the syringe.

The video circulated on social media on Thursday, but rather than focusing on the embarrassing blunder, some observers suggested that posting the footage was an attack meant to diminish public confidence in vaccines.

For instance, when independent journalist Tim Pool tweeted the video on Thursday, Democrat strategist Nate Lerner said, “It’s really weird how anti-vaccine you are. You’ve been hanging out with Alex Jones too much, my guy.”

Another Democrat commenter also smelled an anti-vaxxer rat. “A mistake that probably happened because of the media attention,” he said of the botched shot. “The real question is, what are you trying to accomplish with this tweet? Furthering distrust in institutions that function great while still being susceptible to the occasional bit of human error?”

The hospital issued a statement on Wednesday afternoon, saying the nurse in question was inoculated “again” to “remove any doubt raised that he was not fully vaccinated and further strengthen confidence in the vaccination process.”

University Medical Center, the first hospital in its region to receive the Covid-19 vaccine developed by Pfizer and BioNTech, implied that the scene with the apparently empty syringe was legitimate. It said that “re-vaccinating the nurse will not cause adverse effects.”

Other observers pointed out that the El Paso incident is just one of several videos on social media that appear to show deceptive or botched public vaccinations. One such video shows Queensland Premier Annastacia Palaszczuk purportedly receiving a flu shot in April, but the syringe is covered with a cap.

According to a Reuters fact-check of the video, however, Palaszczuk had received her shot moments earlier, and the video shows it being re-enacted for photographers.

The idea that we can protect ourselves from a virus by injecting multiple doses of that same virus into our own body is the worst of all insulting lies aggressively pursued and sustained by Big Pharma, Corporate Media, online social networking sites, and governments around the world.

We are now dealing with a global system where the interests of the few take precedence over the lives of the majority whom they consider as “useless eaters”, people that are actually contributing to the economy by doing physical labor as opposed to those “armchair” executives in the financial sector, and all other institutions of false superiority and power.

Otherwise, the sheer ignorance of our leaders about basic human anatomy, and their total dependency on the medical establishment in matters such as COVID19, are more than enough to not expect anything scientific about their approaches to public health.

Worst of all is when the government itself believes in the “overpopulation” hoax perpetrated by the United Nations itself. There’s no overpopulation in the countryside, but only in some large urban centers of the world, which is a direct consequence of the corporate’s insatiable drive for high profit through logistical cost cutting measures, and lack of countryside infrastructures.

We really are left with no other option than to resist our own governments’ ignorant imposition of economic lockdowns and coercive mass vaccinations, because there’s no politician who can ever serve the needs of the people he’d sworn to serve, as the political system itself only allows people with access to deep pockets, that’s where the politician’s true loyalty lies.

The totalitarians think that societal bond must be systematically severed through the mandatory wearing of useless and neurotoxic face masks, social distancing, and the deliberate throttling of social media posts which expose the whole sinister operation, so that any organized expression of dissent is curtailed at the outset.

But as one wise man said, “Those who make peaceful revolution impossible will make violent revolution inevitable.”