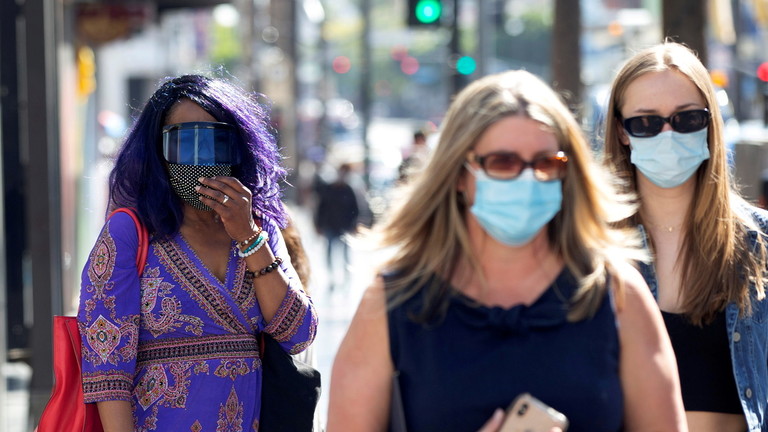 This is multiple layers of stupidity of the highest order.

The CDC has released a study backing up its decision to recommend indoor masking for both vaccinated and unvaccinated Americans. The study examined one outbreak and found three-quarters of people testing positive were vaccinated.

The Centers for Disease Control and Prevention (CDC) revised its masking guidelines on Tuesday, urging all Americans in areas with high Covid-19 transmission to mask up when indoors, regardless of vaccination status. Mask mandates in companies, government departments, and certain local jurisdictions followed, as CDC Director Rochelle Walensky insisted the decision was made on the back of fresh scientific evidence.

The CDC released that evidence on Friday. In a study of 469 cases of Covid-19 that broke out in the resort town of Cape Cod, Massachusetts, earlier this month, 74% occurred in “fully vaccinated persons.” Four out of five patients hospitalized were fully vaccinated, and on average the inoculated had completed their two rounds of doses only 86 days before infection.

The cases studied occurred in people vaccinated primarily with Pfizer and Moderna shots, with a smaller number having received Johnson & Johnson’s one-dose jab. No one vaccine was singled out as providing better or worse protection, and none appeared to prevent symptoms from developing. Some 79% of vaccinated patients were symptomatic, the study noted.

Lab testing revealed that 90% of all the Cape Cod infections involved the Delta variant of the coronavirus.

The report lends weight to the argument that the current crop of vaccines aren’t as effective against the Delta variant, although the CDC and World Health Organization (WHO) both insist that vaccination is effective against “severe disease and death” from the virus, to quote WHO technical lead Maria Van Kerkhove in a briefing earlier on Friday.

However, the CDC study noted that similarly high viral loads were found in vaccinated and unvaccinated people. Walensky stated on Friday that “high viral loads suggest an increased risk of transmission” and raised concern that “vaccinated people infected with Delta can transmit the virus.” The study itself is less alarmist, stating that “microbiological studies are required to confirm these findings.”

Walensky said that the Cape Cod study was “pivotal” in informing the CDC’s decision to recommend indoor masking. Previously, the agency drew flak from Republicans for using an extremely limited Indian study on viral loads and potential transmission to back up the mask guidance, as was revealed by documents leaked to the Washington Post on Thursday.

The study appears to negate the argument by top health officials that unvaccinated Americans are responsible for the fourfold rise in Covid-19 cases in the US since June. “This is an issue predominantly among the unvaccinated, which is the reason why we’re out there, practically pleading with the unvaccinated people to go out and get vaccinated,” White House coronavirus adviser Dr. Anthony Fauci told CNN on Sunday, adding that the US is currently moving “in the wrong direction” with regard to stamping out Covid-19.

Whether mask mandates will slow the spread of the Delta variant will be borne out with time. Beyond requiring masks and pressuring Americans to get vaccinated, the White House is running out of options.

A national vaccine requirement is “not under consideration at this time,” Deputy Press Secretary Karine Jean-Pierre told reporters on Friday. Jean-Pierre also stated that “we are not going to head towards a lockdown.”

Meanwhile, a spokesman for the White House Covid-19 team Ben Wakana lashed out at the New York Times and the Washington Post, berating the papers for “doing it wrong” and being “completely irresponsible” for quoting the CDC documents without “important context” about vaccinations.