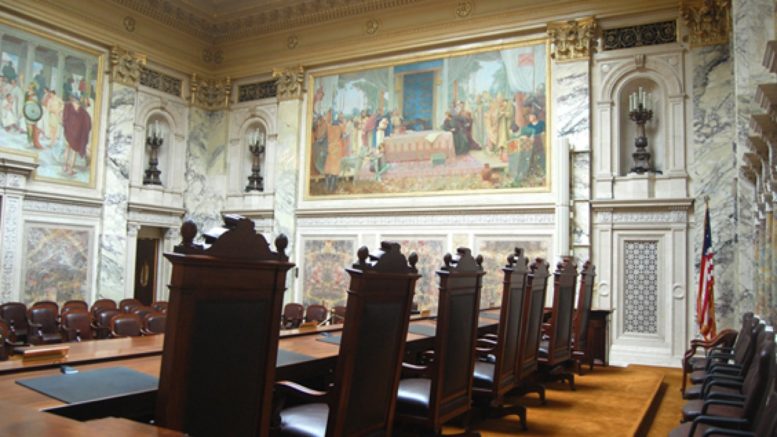 On Wednesday, the Wisconsin Supreme Court struck down a stay-at-home order issued by Department of Health Services Secretary-designate Andrea Palm in order to slow the spread of the coronavirus. While the court did not challenge the Emergency Declaration issued by Gov. Tony Evers (D-Wisc.), it ruled that Palm violated state law by not following proper rulemaking procedures that allow the Republican-dominated legislature some say in the issuing of such orders.

According to the Milwaukee Journal-Sentinel, the ruling strips coronavirus regulations so that “bars, restaurants and concert halls are allowed to reopen — unless local officials put in their own restrictions.”

While the Journal-Sentinel claimed that the court “struck down Gov. Tony Evers’ order,” the very first line of the opinion, written by Chief Justice Patience Roggensack, contradicts this claim.

“This case is about the assertion of power by one unelected official, Andrea Palm, and her order to all people within Wisconsin to remain in their homes, not to travel and to close all businesses that she declares are not ‘essential’ in Emergency Order 28. Palm says that failure to obey Order 28 subjects the transgressor to imprisonment for 30 days, a $250 fine or both. This case is not about Governor Tony Evers’ Emergency Order or the powers of the Governor,” Roggensack argues.

According to the opinion, Palm “broke the law when she issued Emergency Order 28 after failing to follow emergency rule procedures,” and she “exceeded her authority by ordering everyone to stay home, closing all ‘non-essential’ businesses, prohibiting private gatherings of any number of people who are not part of a single household, and forbidding all ‘non-essential’ travel.”

Importantly, Roggensack adds, “We do not conclude that Palm was without any power to act in the face of this pandemic. However, Palm must follow the law that is applicable to state-wide emergencies.” By refusing to do so, she impinged upon the Legislature’s constitutional core power and its functions.” Under Palm’s interpretation, “an elected official could create law applicable to all people during the course of COVID-19 and subject people to imprisonment when they disobeyed her order.”

Republican lawmakers brought the suit in order to have a seat at the table when it comes to coronavirus restrictions.

Hagedorn argued that Wisconsin state law allows the governor’s designate to have this authority. “The legislature may have buyer’s remorse for the breadth of discretion it gave to DHS in (state law). But those are the laws it drafted; we must read them faithfully whether we like them or not.” In 1981, amid the HIV and AIDS epidemic, the legislature gave DHS the power to issue orders.

“Isn’t it the very definition of tyranny for one person to order people to be imprisoned for going to work among other ordinarily lawful activities?” Bradley asked.

The court’s ruling came after a few thousand people protested the coronavirus restrictions at rallies across the state. More than 500,000 Wisconsinites have filed for unemployment since the government forced businesses to close. – PJMedia

MADISON – The Wisconsin Supreme Court has struck down Gov. Tony Evers’ order shutting down daily life to limit the spread of coronavirus — marking the first time a statewide order of its kind has been knocked down by a court of last resort.

The state’s highest court sided with Republican lawmakers Wednesday in a decision that curbed the power of Democratic Gov. Tony Evers’ administration to act unilaterally during public health emergencies.

The 4-3 decision was written by four of the court’s conservatives — Chief Justice Patience Roggensack and Justices Rebecca Bradley, Daniel Kelly and Annette Ziegler.

The ruling immediately lifts all restrictions on businesses and gatherings imposed by the administration’s order but keeps in place the closure of schools until fall. It comes after Evers had already begun lifting some restrictions because the spread of the virus has slowed for now.

Republicans who brought the lawsuit had asked the justices to side with them but to stay their ruling for about a week so legislators and Evers could work out a new plan to deal with the pandemic.

The justices declined to do that and had their ruling take effect immediately.

To put any new limits in place, the Democratic governor and Republican-controlled Legislature will be forced to work together to deal with the ebbs and flows of the outbreak — something the two sides have rarely been able to achieve before.

The Evers administration will submit a new plan Thursday, even though Republicans had asked them to do so sooner. Republicans have yet to offer one of their own.

With no COVID-19 policies in place, bars, restaurants and concert halls are allowed to reopen — unless local officials implement their own restrictions. That raises the prospect of a patchwork of policies, with rules varying significantly from one county to the next.

The court issued its decision a month after Kelly lost his seat on the court. He will be replaced in August by Dane County Circuit Judge Jill Karofsky, a liberal who beat him by 10 points in the April 7 election.

Senate Majority Leader Scott Fitzgerald of Juneau, who brought the lawsuit with Assembly Speaker Robin Vos of Rochester, said in an interview that it was Evers who “set the table for chaos” by lifting restrictions on retail businesses this week instead of following his own reopening plan that required certain benchmarks to be met first.

“The public started to become skeptical,” he said.

… Less than an hour after the ruling was released, the Tavern League of Wisconsin told its members they could greet customers again in their bars and urged them to adopt safety guidelines.

… Wisconsin was one of 43 states to be locked down by its governor and as of Wednesday, it was one of 11 with such restrictions still in place.

Wednesday’s ruling also came after public support for the restrictions had waned. A few thousand protested against the governor’s restrictions at rallies across the state in recent weeks, some comparing Evers to a murderous dictator and others complaining the order had nearly ruined their livelihoods. – Milwaukee Journal Sentinel

While there are political overtones between the two major warring parties during this election year, it’s very clear to us that, ultimately, we are just being led to the slaughterhouse through subsequent mandatory vaccinations, and “contact-tracing” mass surveillance system. That’s been their common interest from the very beginning.

On top of that, the “new normal” of “social distancing” and “work from home” schemes would be the loss of the spirit of a community, while forcing instead the full digitization of our intercourse with society at large, so that they could monitor our personal views and activities online, one of the major components in the full AI-based automation of their Technocratic Dictatorship.

In addition, the most physical and psychological damage would be coming from our lesser exposure to sunlight, which will make us all vulnerable to more viral infections in the long run.

Indeed, a lack of sunlight can cause a multitude of problems such as weak bones, foot deformities, some cancers, depression, skin problems, weight gain and cognitive issues.

Positive Effects of the Sun

Dr. Bligard says there are many benefits from sunlight, including that it is a free mood enhancer. Being in the sun can make people feel better and have more energy. Sunlight increases the levels of serotonin in the brain, which is associated with improved mood. Not surprisingly, serotonin levels are highest in the summer.

In certain people, the lack of sunlight in the winter seems to trigger depression. Symptoms include bad moods, difficulty making and keeping friends, overeating, tiredness and sleeping too much. Seasonal depression, formerly known as Seasonal Affective Disorder, is rare in the warmer months.

Everyone experiences stress for various factors, such as family, work and health issues. Dr. Bligard says stress can be relieved in a variety of ways, including exercise, having relaxing hobbies, walking the dog or by getting out in the fresh air for a little sun exposure.

Sunlight exposure impacts how much melatonin your brain produces, which is what tells your brain when it is time to sleep. When it gets dark, you start producing melatonin so you are ready to sleep in about two hours. With more sunlight in the summer, you are likely to feel more awake. Dr. Bligard points out that modern technology has allowed us to change our light exposure artificially with lights, TV screens and computer screens (including tablets and cell phones). Consequently, the incidence of insomnia is much higher now than it was before these devices were invented.

Vitamin D is a vitamin involved in maintaining healthy bone strength. One way you can get this sun vitamin is exposure to the ultraviolet light from the sun. However, you don’t need much time in the sun to reap the benefits. Dr. Bligard recommends only 15 minutes of sun exposure to provide all the Vitamin D you need. – LiveWell

Most importantly, adequate exposure to the sun-induced “global warming” actually makes us literally brighter, or more intelligent, to be able to see the stupidity of it all.

But the system they’ve built over the years, decades and centuries is self-sustaining enough that, even if we have awakened more people today with our effective use of the technologies before us, the deeply embedded fear of an “all too powerful enemy” deters most of us from taking the pitchforks and torches up even when, practically, that’s the ultimate way we can eliminate evil for good in this world.

We are trained to wait for a “singular savior” to lead and free us from our collective misery, when all that’s needed is just to flip that mental switch off of the system, and begin taking a succession of persistent actions towards achieving incremental freedoms until the powerful becomes the powerless.

For every action of the enemy must be met with equal, opposite reaction from We, the People.