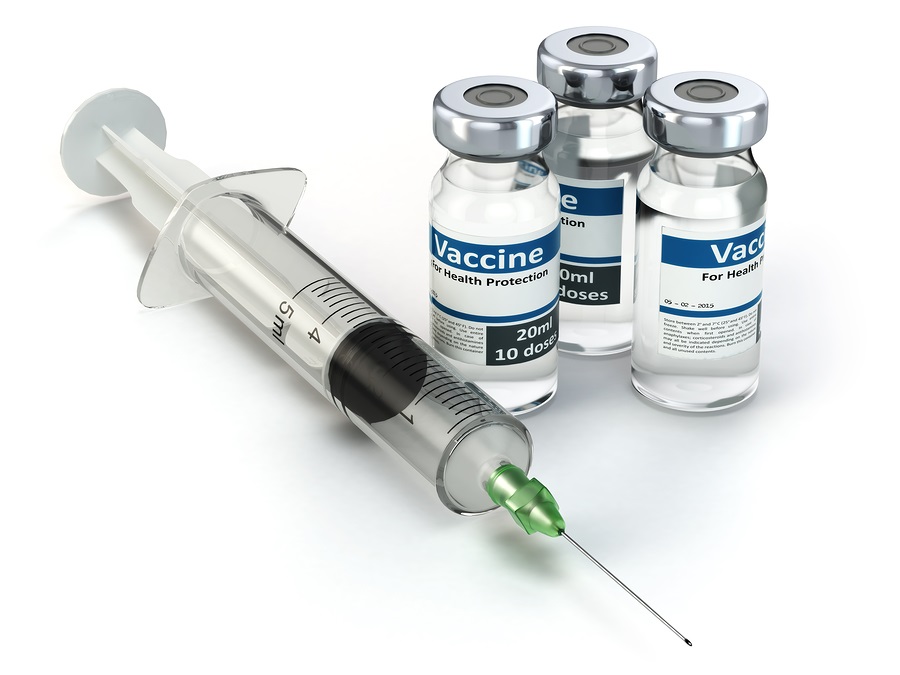 A groundbreaking study done in Shanghai, China, provides a strong case against vaccinations. The study focused on the frequency of adverse reactions against the drug among children.

More than half a million of children are treated every year for adverse drug reactions in the US alone. The Shanghai study found that 42% were caused by vaccines, with reactions ranging from mild skin rashes to anaphylaxis and death. Of all the drugs that are causing adverse reactions among children, vaccines are the most notorious.

It was also found out that the very young children are more vulnerable to drugs and vaccine adverse reactions. Worse, reactions to vaccines are hard to detect due to multiple vaccinations given in one clinic session.

Nevertheless, the adverse effects of vaccination are fully documented:

For years, researchers suggested that millions of vials of polio vaccine, contaminated with SV40, infected individuals between 1953 and 1963 and caused human tumors, and by 1999, molecular evidence of SV40 infections were showing up in children born after 1982. Some experts now suggest the virus may have remained in the polio vaccine until as late as 1999.

Still, the FDA and health authorities turned a blind eye.

In addition, just like Gardasil may well increase your risk of cervical cancer rather than reduce it, the live polio vaccine has also been found to cause polio. And, in rare instances the virus in the vaccine has even been known to mutate into a much deadlier version.  As reported by MSN News in 2009, genetic analysis has proven such mutated viruses have caused at least seven separate outbreaks in Nigeria.

According to the CDC the last case of wild polio in the US—meaning polio caused naturally and not due to the live polio vaccine—occurred in 1979. From 1980 through 1999, there were NO wild polio cases in the US. Instead we had 144 cases of vaccine-associated paralytic polio (VAPP) caused by live oral polio vaccine.

Polio outbreaks in Haiti and the Dominican Republic in 2002 were also traced back to a strain of oral polio vaccine (OPV) that mutated back to virulence.

According to a report by Neil Z. Miller of the Global Vaccine Institute, the live polio virus from the vaccine can remain in your throat for one to two weeks and in your feces for up to two months. So not only is the vaccine recipient at risk, but he or she can potentially spread the disease to others.

In 1999, the Advisory Committee on Immunization Practices (ACIP) recommended that the United States replace the live-virus vaccine with an inactivated “killed” virus vaccine, which is what remains in use today. However, the inactivated polio virus vaccine has not been without its share of serious side effects either. – Healthnuts

Some facts that question the logic behind forced vaccinations include:

The glaring anomaly of providing soft treatment for medical crimes as compared to other professional crimes can only be explained by the plan to depopulate the planet deliberately. For if they are truly looking out for our well-being, much more scientific methods were already found to be more effective in dealing, not just one type of virus, but all of them.

Vaccination is not anchored on real science, but an abomination in the medical field:

Vaccine manufacturers would like you to believe that the “immunity” you receive from vaccines is equal to or better than what is conferred through natural exposure to the infection, but this simply isn’t the case. There are important differences between naturally acquired immunity and temporary vaccine-induced antibody production. Vaccines are never 100 percent protective because they provide only artificial, temporary, typically inferior immunity compared to what your body would receive from natural exposure to a disease.

Immunity is a complicated process with many moving parts—immunological, neurological, and endocrinological—not the dumbed down version the pharmaceutical industry feeds to the public. The common reductionist notion that immunity involves nothing more than a simple antigen-antibody response is a gross oversimplification—not to mention the arrogance that, with a vaccine, they can improve on a biological process that Nature has been perfecting for thousands or even millions of years. Take measles, for example. According to Dr. Suzanne Humphries:7

“Since most vaccines are delivered by injection, the mucous membranes are bypassed and thus blood antibodies are produced but not mucosal antibodies. Mucosal exposure is what contributes to the production of antibodies in the mammary gland. A child’s exposure to the virus while being breastfed by a naturally immune mother would lead to an asymptomatic infection that results in long-term immunity to that virus. Vaccinated mothers have lower levels of virus-specific antibodies in the serum and milk, compared to naturally immune mothers, and thus their infants are unprotected.”

Prior to the vaccine era, mothers were naturally immune to measles and passed on that immunity to their infants via placenta and breast milk. But vaccinated mothers cannot pass along vaccine-induced “immunity” because of the issue described above. As a result, infants whose mothers were born after 1963 are more susceptible to measles than are infants of older mothers. For a healthy child with normal immune function, measles is not a deadly disease—in fact, 30 percent of measles cases among the unvaccinated are missed because they are so mild.8

It should also be noted that the recently reported pertussis (whooping cough)9 and mumps outbreaks10 have occurred predominantly among the vaccinated –and measles “outbreaks”11 have also involved vaccinated persons —invalidating claims that vaccinated people cannot get sick from or transmit infectious diseases. The fact that a lot of vaccinated people still get sick is a prime example of how getting vaccinated is not a “good health” guarantee. In fact, keeping your immune system healthy through good nutrition, exercise, reduction of stress, and limiting exposure to environmental toxins is a much better strategy for staying well and also for helping you to heal more quickly if you do get sick.

The Truth About Herd Immunity

One of the most commonly parroted sound bites in the vaccine debate is the term “herd immunity,” tossed around by vaccine advocates who don’t really understand the concept. They suggest that if 95 percent or more of the population can be made “immune” to an infectious disease via vaccination, the disease will be eradicated or controlled. Despite these claims, there is little proof that vaccines are responsible for eradicating diseases even when “herd immunity” vaccination levels are reached. Recent outbreaks of common diseases like measles are evidence of this.

Overvaccination not only exposes people to potentially dangerous adverse reactions, but it may damage the health of the greater community. Take varicella zoster (chickenpox), for example. According to Dr. Humphries:12

“Prior to the universal varicella vaccination program, 95 percent of adults experienced natural chickenpox (usually as school aged children)—these cases were usually benign and resulted in long term immunity. This high percentage of individuals having long term immunity has been compromised by mass vaccination of children, which provides at best 70 to 90 percent immunity that is temporary and of unknown duration—shifting chickenpox to a more vulnerable adult population where chickenpox carries 20 times more risk of death and 15 times more risk of hospitalization compared to children. Add to this the adverse effects of both the chickenpox and shingles vaccines, as well as the potential for increased risk of shingles for an estimated 30 to 50 years among adults.”

A young child with active chickenpox, who comes into contact with an adult who had chickenpox as a child, is giving the adult a natural “booster” that will not cause symptoms but will strengthen the adult’s immunity to the disease. But since the introduction of the chickenpox vaccine in 1995 in the US, followed by chickenpox vaccine mandates in the states, there are fewer natural boosters for the adult population. Now, there is a shingles (herpes zoster) epidemic among adults – and Merck is the sole producer of both chickenpox and shingles vaccine in the US!

The growing community of antivaxxers is not ringing up the alarm bells because it’s the new fad, but they are experienced parents of vaccinated children who either died after the injections, or they have seen through the agony that their children have to undergo because they didn’t know any better.

The rest of the antivaxxers are those who can tell you a thing or two of the best method to protect the children from any viral infections sans government intervention. We prefer the use of electric current from a rechargeable battery, of course, due to its availability and because of it being non-consumable, or that the child doesn’t need to swallow anything.

Plus, it is so hard for the health department to debate against the veracity of electricity being a full spectrum antiviral modality by showing them how to electrify the parasites in a film of blood on the microscope slide, which again surprises us why this is not the standard approach against millions of other viruses that are still not being considered, or talked about. Are they going to create a million more vaccines just to “protect us” from the threat?

This is not to mention that vaccines do have the unintended effect of creating new strains, more virulent strains of disease, in a similar way as antibiotic overuse has led to antibiotic resistance. For example, the B. pertussis organism that causes whooping cough has evolved to evade the DPT/DtaP vaccines that have been used worldwide since the early 1950s. A mutated B. pertussis strain has emerged and is associated with severe symptoms.

In the Philippines alone, 600+ children have already died from the Dengvaxia vaccinations in 2016. Nobody has gone to prison yet. In fact, the Department of Health secretary is being accused by some quarters of actively engaging in the cover up to shield Sanofi from its liabilities, the same secretary of health who did not respond categorically to the inquiry of the parents whose young doctor son died from the same vaccine.

In short, they were selling something that is not absolutely needed to begin with, because it is so easy to understand that the unvaccinated Dengue survivors were able to withstand against the infection solely on the virtue of good nutrition.

Soon, the Senate of the Philippines has found out that all of the authorities engaged in the approval and implementation of the said vaccination program were under the payroll of Sanofi, as regulators, consultants and government affiliated laboratories at the same time.

So, our abhorrence to anything that looks and quacks like a vaccine is founded on a rock solid platform. We fully understand the problem, and we have presented the best scientific solution against the threat of all viruses, known and unknown.

Is there a correlation that when we released this Virutron technology to the public, in response to the succession of deaths caused by the untested Dengvaxia vaccine, that the DOH-Philippines sounded the alarm of the resurgence of measles, which was then followed thereafter by the UN-WHO publication of its concern about “vaccine hesitancy”?

They’re really upping the ante in their genocidal plan to thin the herd, as justified with the myth of global warming due to carbon emissions being aggravated by everyone farting 200 times a day and for the rest of their lives.

It is indeed high time now to consider all those who continue to peddle and force vaccinate our children as murderers they are, and we all know how to deal with murderers, right?