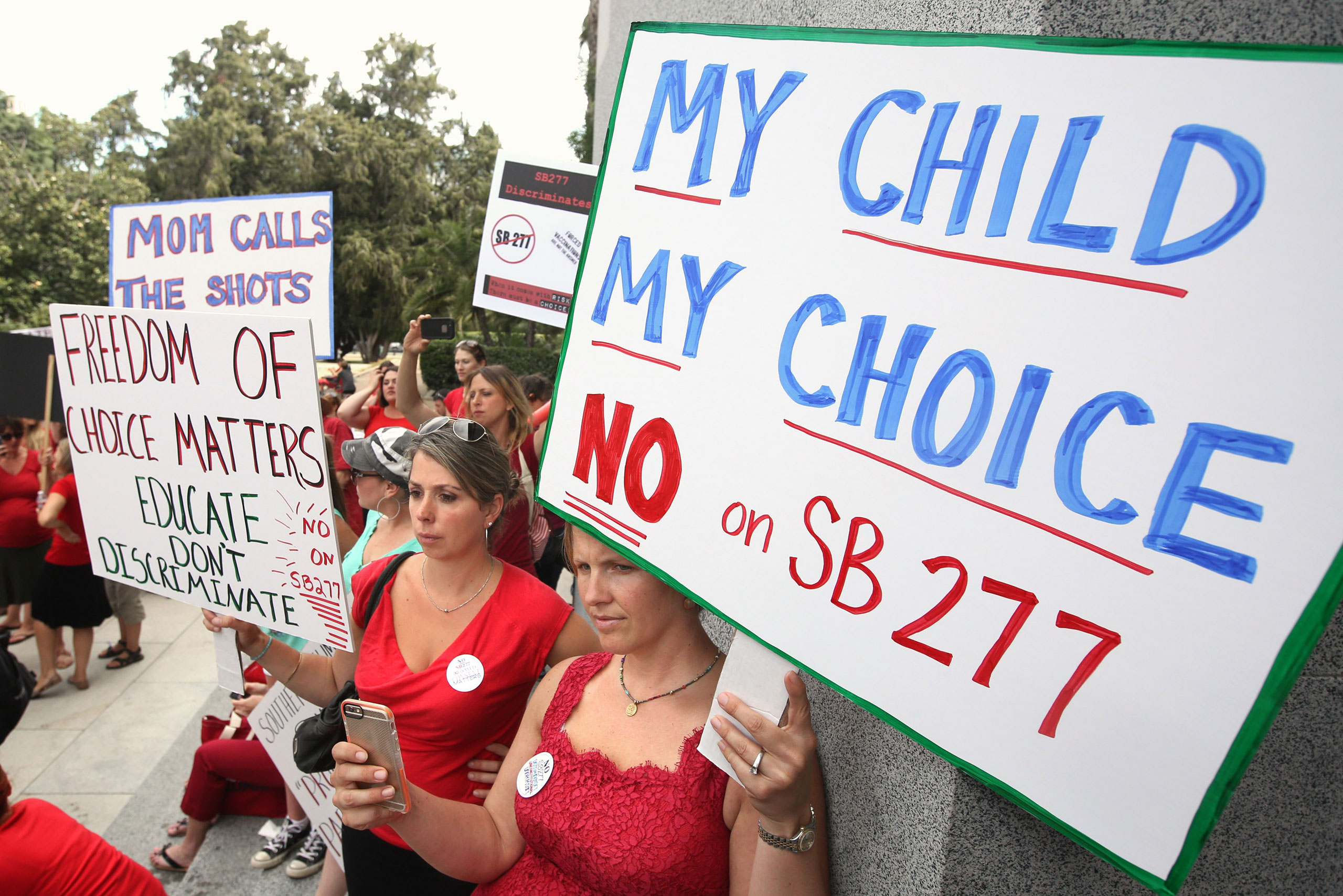 The anti-vaccination movement isn’t just a fad that someday will go out of fashion, or it will just die down because the entire system is actively suppressing it. It will be sustained by those same viruses and toxic components that are in the vaccines, which the government continue to tolerate, or even mandate for compulsory administration against the will of an enlightened population.

The systematic demonization of antivaxxers worldwide will be met with a stronger response from the surviving parents of the victims of the continuing Vaccination Holocaust, because it is the most human thing to do to prevent more innocent victims from dying of a useless, illogical, and risky medical ritual, i.e. the deliberate injection of viruses to protect the child from the same adversaries.

‘I will never get over feeling I killed my son’: Anti-vaccination activists refuse to be ‘silenced’

Vaccination skeptics say the US government has joined with pharmaceutical companies to shut them down, and the veil of silence over the true dangers of inoculation is secretly killing hundreds of children each year.

When she checks on one of her three living children sleeping, Krystle Cordingley will sometimes see not their faces, but the “grey and lifeless” face of her son Corbyn, whom she found dead in his bed 14 hours after a flu vaccination.

That was over five years ago.

“I’m broken. I am not suicidal or unable to function, but my heart will always be shattered. I will forever feel guilty for being the one that took my son in to be vaccinated, and I don’t know if I will ever get over the feeling that I killed him,” says Cordingley, who now dedicates her life to fighting against vaccination.

From the uncomprehending, tearful look he gave her after the flu shot, to the meal she prepared for him before her evening shift at the hospital – which she still keeps in her freezer, unable to throw it away – to how his dad peeked into his room, thought that his son was sleeping peacefully on his stomach and didn’t come closer.

Then, how when she returned home, and was preparing to nurse him, she noticed his chest was not moving, turned over his face, and screamed, aware straight away it was too late. Then, the vainly desperate attempts to revive him.

“Of all my years of emergency response training I never thought the first child I would use my emergency training on would be my own,” says Cordingley. “I still have flashbacks of the medical personnel cracking my child’s sternum to continue a more productive CPR, compressing his chest like he was a rag doll.”

The official medical cause of death was the deeply unsatisfying “Unknown”.

Assured only that her son did not suffocate, Cordingley, who lives in Ogden, Utah, wanted to know more, and would not let it go. She says that a third-party neuropathologist identified severe damage to Corbyn’s brain stem and hippocampus, and told the mother, that “she sees that much damage from younger SIDS [Sudden Infant Death Syndrome] babies all the time, but never in older children and she is surprised he lived as long as he did.”

Cordingley believes that it is not unrelated that as well as the flu shot, Corbyn received five different vaccines, including MMR, 43 days before his death.

Cordingley’s second life as an activist began there and then, though she does not pretend that it in any way compensates for the loss of her first.

As a medical lab scientist in her day job, it is hard to caricature Cordingley as a hippie vaccine refusenik, and her arguments are decidedly post-Wakefield – medical terms abound, she sends references to studies.

Cordingley says her quest is not about turning down decades of medical research, but coming to independent conclusions from papers that are out there, and the real ignorance is among those who simply believe what they are told by health professionals.

“I have many parents who reach out to me, asking me what they should do. My response every time is: do your research,” she says. “I am not forcing their hand. They are coming to the conclusion on their own. Never once have I told a parent not to vaccinate.”

The concerns voiced by Cordingley and several other leading vaccination skeptics are varied – from severe side effects, to the impact of preservatives used, to individual biological intolerance, to a lack of effectiveness.

But the overall view of the situation was almost identical: health impacts are systematically under-reported, dissent dismissed, and the government is in the pocket of large medical corporations who create a web of conflicts of interest. Meanwhile, those who have suffered are dismissed as numerically insignificant.

“My son was not one in a million injured as I’ve now become friends with hundreds of individuals claiming their children died or are continuing to suffer side effects,” says Kathleen Berrett, mother of teen Colton, who developed a disabling inflammation of the spine, shortly after being administered an HPV vaccine, and later took his own life.

“I feel that the government’s mocking our loss and telling us our children don’t matter – just an acceptable number WE have to sacrifice,” says Cordingley.

The solution: massive fresh research by independent bodies, a return to legal liability for vaccine producers, and more training and encouragement for doctors to report their concerns about side effects. In totality, an attitude change to caution, rather than unquestioning endorsement, or worse than that, forced vaccination.

“The system they have set up is not designed to create ‘safe’ vaccines. It is a system designed to provide substantive monetary incentive, while shielding from any liability for damages caused. This is inherently unsafe,” says Kristen Chevrier, director of the campaign group Your Health Freedom.

For the medical establishment, the anti-vaxxers make for an awkward opponent. The optics favor the renegades: passionate grassroots advocates with devastating backstories versus the might of an establishment represented by lecturing affluent doctors and politicians, who may not actually vaccinate their own children either.

With greater access to medical information that anyone can cite, and with campaigners’ ability to self-organize through social media, the size and authority advantages are further eroded for the government. To a lay eye, the links presented by Cordingley look no less imposing than those on the CDC website.

And that’s before taking into account a population naturally apprehensive about actively injecting their healthy child for diseases that are either vanishingly rare, like polio, or mostly trivial, like chicken pox.

But it is a battle that health authorities feel they must win.

The WHO, which officially proclaimed vaccination hesitancy as one of the top global health issues of 2019, says that 2-3 million lives are saved annually by effective vaccinations, and an additional 1.5 million could survive annually if their coverage spreads.

But tendencies in the West, at least, point in the opposite direction. In the UK, nine out of 12 vaccines had lower uptake than the year before in 2017/8 (though levels are still above those of a decade ago) while in the US popularity has remained static. Between the turn of the millennium and 2015, the number of entirely unvaccinated infants rose fourfold, though still constitutes less than two percent.

While overall, herd immunity is holding up, Europe suffered its worst measles outbreak in a decade with 80,000 cases last year, with Japan reporting similar spikes. The US, which eliminated the disease altogether by 2000, is on pace to suffer its worst measles statistics since 1992, though the absolute numbers of patients remain in the hundreds.

Authorities are trying disparate measures – from playing up the impact of epidemics, to vaccination campaigns, to a lap of honor in Congress for a teenager who asked Reddit how he could get shots, after being denied them as a child by his anti-vaxxer mother, to publicizing stories of unvaccinated children suffering from preventative illnesses that are every bit as devastating as Corbyn’s.

There are also sterner suggestions: from creeping compulsory vaccination, which Italy has just reintroduced, to blaming Russian agents for amplifying debate, to calls from top officials in Washington and healthcare bodies for social networks to shutter anti-vaccination groups.

But for Cordingley, all these measures are a sign that they are closer than ever to a flip of public consciousness.

“The smear campaigns, the censoring, and mandating is a huge cry for help by the pharmaceutical companies before they drown in their own deceit. They can only go so far before it backfires and parents see it all on their own,” says Cordingley, who uses social media to spread her message.

Vaccination Liberation, an activist group from Idaho, believes that as the battle intensifies, this will become a civil rights issue, particularly as ever more hardline measures are handed down from above.

“The presumed and unconstitutional authority of legislators to mandate vaccines, a form of medical rape, has not abated in the face of two generations of extremely unhealthy children and adults,” says its founder, Ingri Cassel.

And having spent years fighting their cause on the margins, they are not about to stop now.

“They are trying to suppress the wrong group of people. Parents who have lost their children are the last group you want to silence. They will only get louder and fight harder,” says Cordingley.

Yes, we can afford to consider mass vaccination as genocide and holocaust because there is something safer and more effective in neutralizing all types of viruses, known and unknown, yet the authorities are purposely ignoring it for whatever reasons.