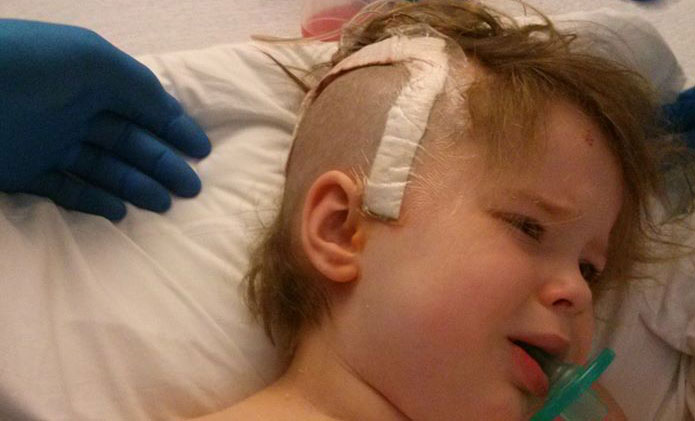 Recently in The Snap Mom Community, a mom asked for opinions about why she should vax and why she shouldn’t, and Anne Abbot responded with her story of her child’s vaccine injury that resulted in a brain surgery. I just knew that we needed to share this story because folks, this is real life.

by Anne Abbot | guest writer for The Snap Mom

Our daughter, Roz, was born a happy, healthy little girl on June 17, 2010. She developed just like all children her age and hit her milestones on or before the target age. My husband and I decided to do vaccines one at a time on a delayed schedule after our first family doctor gave her PediaX vaccine with a combination of vaccines.

At the age of one, we began with her DTap vaccinations and spread them out over a period of time. Then at her two-year checkup, we decided to begin her MMR vaccinations.

On June 12, 2012, Roz was given the MMR vaccine. She had the normal fussy period, as she did with the DTap, but after a week, she began to seem a little off, not as responsive, and she continued to be fussy. She began to run a low-grade fever on June 27.

On June 28, Roz had been outside for a short period of time. After her shower, my husband put her in the chair. He walked in after about five minutes and noticed she wasn’t moving and was in a staring state, unresponsive. We immediately rushed her to the ER.

After 30 minutes, the doctor confirmed she was having a seizure and had a fever of 101.1. They ran a series of tests and found nothing in the ways of infection, virus or bacteria. They transferred her to Children’s Hospital, where we spent the night for observation. The doctors told us that she had had a febrile seizure. They told us not to worry because febrile seizures are common in children.

Everything went well for the next few months. Then on August 8, after playing at a park, Roz became lethargic. When I got her home, she was in a seizure state. She received emergency seizure meds in the ER, and after 45 minutes, she was transferred again. She remained in the hospital for a couple of days and had an MRI and EEG.

The MRI showed that her myelination was not developing normally. Myelination is the formation of the myelin sheath around nerve cells that allows the nervous system to function properly. However, we were told not to worry since Roz was so young and since her EEG was normal. We made sure to keep her inside when it was hot, watched her diet and took precautions.

On November 1, Roz woke up acting strangely; then she suddenly began to seize. I administered Diastat. She woke up an hour later and went into another seizure. We found ourselves back at Children’s with croup this time.

Beginning in December, she had seizures about every month, and they began to get worse. Instead of having partial complex seizures, she began to have partial complex that generalized and Tonic-clonic (TC) seizures.

By April 2013, she was having seizures every week. In the middle of April, Roz had three major TC seizures within a week’s time. We decided to take her to Cincinnati Children’s to get some answers.

Throughout all the seizures, Roz continued to develop according to her age except for a speech delay. Over a period of time, her seizures changed but became more frequent. Our neurologist suggested that we meet with the epilepsy doctor to see if Roz would be a candidate for brain surgery.

On October 7, 2013, Roz was admitted for a week of VEEG monitoring and major scans that concluded she was a candidate for resectioning surgery of her right occipital lobe. The scans showed an area that was thinning. So we waited and watched her continue to seize multiple times daily.

On February 5, we went in, and Roz underwent internal grid placement on the right side of her brain (120 electrodes in all.) We met with doctors daily. They told us that that the seizures were continuously happening all over the right hemisphere of her brain, not just in the right occipital lobe, and that a resection was not an option. Our hearts dropped.

After the doctors got the information they needed, they felt she had Rasmussen Syndrome or Cortical Dysplasia.

Our normal little girl had to have a craniotomy and right hemispherotomy that would leave her with left hemiparesis. (She would have to have half of her brain removed.)

On February 12, she went in for a nine-hour surgery. She went in with a fully functioning body and came out with half a body working. She underwent four weeks of intense inpatient rehab and came home not walking. The biopsy confirmed she had Rasmussen Syndrome.

We are still seizure free, 11 months post-op, but she remains unable to use her left hand and has weakness in her left arm and leg. She is also blind in the left side of both eyes, but she is talking so much more.

It is hard to believe that a little girl, who was healthy at birth, has experienced a life full of traumatic events following her first MMR vaccine. I blame myself every day with the “what ifs.” Now we want Roz’s story to be heard, and we want the vaccine companies to take precautions.

To keep up with Anne and her daughter, Roz, LIKE their FB Fan Page here.