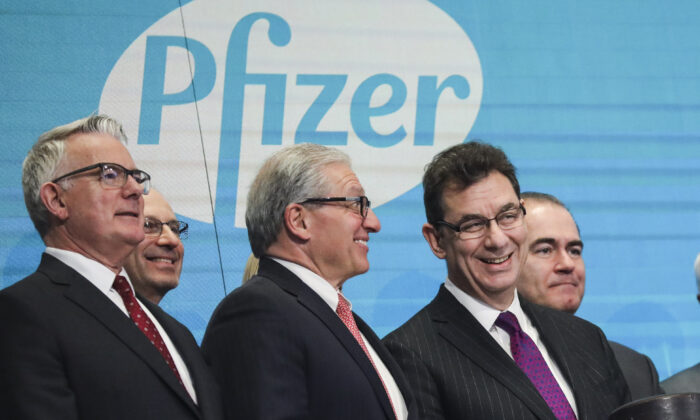 Pfizer Inc, is currently involved in marketing its experimental mRNA vaccine with the relentless support of national governments.  Amply documented, barely reported by the media, numerous cases of  deaths and injury have occurred.

“the bureaucratic technique of averting future accusations of policy error or wrongdoing by deflecting responsibility in advance” (William Safire, NYT,)

Extensive fraud and coverup prevail at the highest levels of government.

The “Green Light” to market the experimental mRNA vaccine was granted back in December 2020, despite the fact that according to the FDA, the vaccine is an “unapproved product”.

The FDA in its ambiguous (C. Y.A.) statement has provided a so-called Emergency Use Authorization (EUA) to the Pfizer-BioNTech vaccine, namely “to permit the emergency use of the unapproved product, … for active immunization…” (see below)

There is something fishy and “contradictory” in this statement. The experimental Pfizer mRNA vaccine is both “unapproved” and “permitted”.

I have checked this statement with a prominent lawyer. It is blatantly illegal to market an “unapproved product”.

The Pfizer-Moderna vaccine is categorized by the CDC as an “investigational drug”. “The emergency use” clause is there to justify the launching of what might be described as an “illegal drug”.

There is an ongoing fear campaign but there is no “Emergency” which justifies “Emergency Use”. Why?

What is unfolding is the “fraudulent marketing” of an “unapproved” vaccine.

In a historic US Department of Justice decision in September 2009, Pfizer Inc. pleaded guilty to criminal charges. It was “The Largest Health Care Fraud Settlement in Its History” according to the DoD:

American pharmaceutical giant Pfizer Inc. and its subsidiary Pharmacia & Upjohn Company Inc. … have agreed to pay $2.3 billion, the largest health care fraud settlement in the history of the Department of Justice, to resolve criminal and civil liability arising from the illegal promotion of certain pharmaceutical products, the Justice Department announced today. …

Pharmacia [Pfizer] & Upjohn Company has agreed to plead guilty to a felony violation of the Food, Drug and Cosmetic Act ….  Pharmacia & Upjohn will also forfeit $105 million, for a total criminal resolution of $1.3 billion. (DoD emphasis added)

How on earth can you trust a Big Pharma vaccine conglomerate which pleaded guilty to criminal charges by the US Department of Justice including “fraudulent marketing” and “felony violation of the Food, Drug and Cosmetic Act”?

“Fraudulent marketing” is an understatement: The mRNA vaccine announced by Pfizer and Moderna is based on an experimental gene editing mRNA technology which has a bearing on the human genome.  The standard animal lab tests using mice or ferrets were not conducted.  Pfizer “went straight to human “guinea pigs.”

Human tests began in late July and early August 2020. “Three months is unheard of for testing a new vaccine. Several years is the norm.”

Our thanks to Large and JIPÉM

This caricature by Large + JIPÉM  explains our predicament:

Mouse No 1: “Are You Going to get Vaccinated”,

Mouse No. 2: Are You Crazy, They Haven’t finished the Tests on Humans Yet”

“The plan to develop a vaccine is profit driven. It is supported by corrupt governments serving the interests of Big Pharma. The US government had already ordered 100 million doses back in July and the EU is to purchase 300 million doses. It’s Big Money for Big Pharma, generous payoffs to corrupt politicians, at the expense of tax payers.”

So-called “emergency use” has been granted to Pfizer with a view to promoting a pharmaceutical product which is “experimental”, “unapproved” by the FDA and outright dangerous.

Legal Definitions are Turned Upside Down: The Transition from “Unapproved” to “Approved”

Pfizer will pay $2.3 billion to settle charges of promoting its drugs for uses not approved by the Food and Drug Administration.

Pfizer Inc which is currently promoting the mRNA vaccine, was accused in 2009 of “Fraudulent Marketing”.

See excerpts of DoJ document below.

WASHINGTON – American pharmaceutical giant Pfizer Inc. and its subsidiary Pharmacia & Upjohn Company Inc. (hereinafter together “Pfizer”) have agreed to pay $2.3 billion, the largest health care fraud settlement in the history of the Department of Justice, to resolve criminal and civil liability arising from the illegal promotion of certain pharmaceutical products, the Justice Department announced today.

Pharmacia & Upjohn Company has agreed to plead guilty to a felony violation of the Food, Drug and Cosmetic Act for misbranding Bextra with the intent to defraud or mislead. Bextra is an anti-inflammatory drug that Pfizer pulled from the market in 2005. Under the provisions of the Food, Drug and Cosmetic Act, a company must specify the intended uses of a product in its new drug application to FDA. Once approved, the drug may not be marketed or promoted for so-called “off-label” uses – i.e., any use not specified in an application and approved by FDA.

Pfizer promoted the sale of Bextra for several uses and dosages that the FDA specifically declined to approve due to safety concerns. The company will pay a criminal fine of $1.195 billion, the largest criminal fine ever imposed in the United States for any matter. Pharmacia & Upjohn will also forfeit $105 million, for a total criminal resolution of $1.3 billion.

As part of the settlement, Pfizer also has agreed to enter into an expansive corporate integrity agreement with the Office of Inspector General of the Department of Health and Human Services. That agreement provides for procedures and reviews to be put in place to avoid and promptly detect conduct similar to that which gave rise to this matter.

Those who don’t know Pfizer’s checkered history may wish to learn something about the company’s recent criminal and civil crimes, especially as the company’s Covid vaccine promotion is set for a warp speed rollout. The UK government has already purchased 30 million doses of Pfizer’s Covid MRNA vaccine. The company has said it is on schedule to produce 100 million doses by the end of the year, and an additional 1.3 billion doses next year.

Here’s a brief glimpse of Pfizer’s track record for safety and ethics. This is a short list, by no means inclusive of the company’s entire rap sheet.

Pfizer’s Covid vaccine is being rolled out with nothing but positive press from every mainstream media outlet in the country. Meanwhile,  more than half of Americans surveyed have said they will not take a Covid vaccine. The plain fact is that many questions remain unanswered regarding this, or any other, Covid vaccine’s safety and efficacy.

What we do know, from legal history, is that Pfizer’s past transgressions might lead some reasonable people to question whether or not they will submit to any vaccine made by the company. – DMLawFirm.com