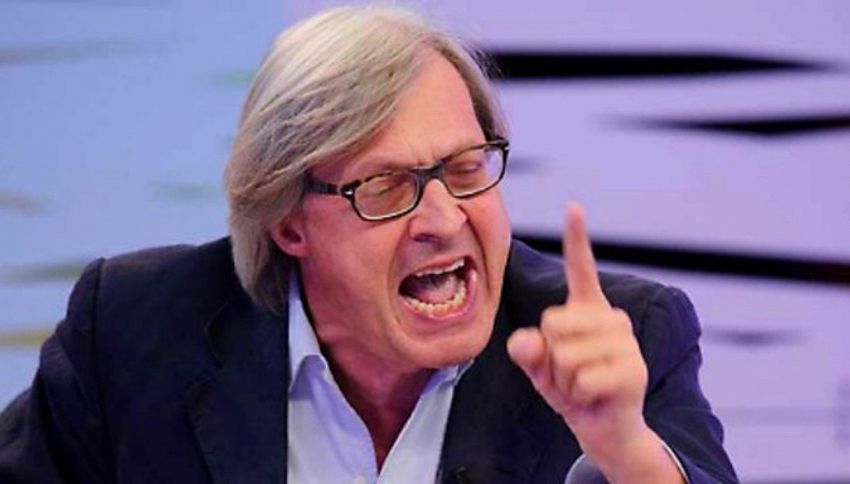 On Friday, April 24, 2020, Vittorio Sgarbi, a member of the Italian Chamber of Deputies, denounced what he claims are false coronavirus death statistics. Sgarbi feels that fake statistics are being propagated by the government and the media to terrorize the citizens of Italy and establish a dictatorship.

The member of the Forza Italia party slammed the closure of 60% of Italian businesses for 25,000 Chinese-Coronavirus deaths from the floor of the legislature. “It’s not true,” he said. “Don’t use the deaths for rhetoric and terrorism.” According to the National Institute of Health, 96.3% did not die of coronavirus, but of other pathologies stated Sgarbi – which means that only 925 have died from the virus and 24,075 have died of other things claimed Sgarbi, “….the virus was little more than an influenza. Don’t lie! Tell the truth!”

Sgarbi’s controversial speech was delivered during ‘Cura Italia’ decree law discussions. The proposal intends to develop measures to strengthen the national health service based on what he claims is false data. Sgarbi challenged his colleagues to investigate the real numbers themselves and be united in the reporting the truth:

Let us be united in liberation against hypocrisy and lies, against falsifications, against the false numbers that are given to terrorize Italians. The 25,000 dead, as Professor Bassetti said, died of heart attacks, cancer and other…Let’s not use them to humiliate Italy. Let’s not use them to give citizens false news. Give the numbers, check them out, and I challenge you before a jury of honor, Trizzino, to look at the numbers…

Sgarbi has been a member of the Italian Parliament several times and also served also in Milan’s municipal government. Sgarbi is also a famous art critic, historian, cultural commentator and television personality.

Transcript: many thanks to Fousesquawk for the translation:

We are on the eve of April 25, and it is necessary to be united against dictatorships and united in the truth. Let’s not make this the chamber of lies.

Not the 26th of February, but the 9th of March, the science, the science evoked here said that the virus was little more than an influenza. That science is what inspired this government, it is said, it was said, and documented, it was said…

Don’t lie! Tell the truth! Don’t make this the chamber of lies. At least the principle of Giambattista Vico is applied, Vico: “verum ipsum factum” [we only know what we make]. So you have heard and you have given the numbers. I want to give them too. No, D’Attis, no, Pagani.

Don’t also say here 25,000 deaths. It’s not true. Don’t use the deaths for rhetoric and terrorism. The numbers from the Higher Institute of Health say that 96.3% died from other diseases. Exactly the data, the numbers… the numbers. Say this, and it is the truth! It is the truth! Read it! Read it!

Colleagues…Colleague. —[Unintelligible] I have read them all. Sixty per cent died from other diseases, according to the Higher Institute of Health. If you don’t know it, study it!

Speech interrupted and Sgarbi is instructed to turn toward the President:

While Italy was a red zone, everyone here was without masks. Today, Basini is accused because he has to wear it. You are ridiculous! You didn’t wear it until the day before yesterday! That is exactly how it is.

In Germany, the economy, health care, and schools will work perfectly on May 4. We are a state with the fewest rights in Europe. Germany has shown proof of strength and the correct response. We here are once more humiliated by Germany even in illness. We have closed 60% of businesses.

I have given data, Dear Trizzino. Go check it out. No, it is clear that I was first to call for the closure of Parliament. Today, here we are, everybody in masks, while the other time, there was only [unintelligible]. There were very few — Dall’Osso. There were few who were wearing the mask, and today you are pointed at if you don’t wear it. Well, precisely because truth is the most important thing, let’s give the actual numbers; let us not continue to lie.

This is certainly strong data. I read it here too, Trizzino 56% in Lombardy, 14% in Emilia, 8% in Piedmont, 5% in Veneto. We cannot imagine applying uniform rules with such disparate zones of the epidemic. And so, I say, at least here we speak the truth. Measure ourselves against Germany.

Let us be united in liberation against hypocrisy and lies, against falsifications, against the false numbers that are given to terrorize Italians. The 25,000 dead, as Professor Bassetti [infectious disease specialiat] said, died of heart attacks, cancer and other… Let’s not use them to humiliate Italy. Let’s not use them to give citizens false news. Give the numbers, check them out, and I challenge you before a jury of honor, Trizzino, to look at the numbers…

Speech interrupted and Sgarbi is instructed to turn toward the President:

Colleague Sgarbi, turn to the president.

I simply said, they all give numbers but not false numbers. Twenty-five thousand people did not die of the coronavirus in Italy. It’s not true. It’s a way to terrorize Italians and impose a dictatorship of consent. It’s ridiculous!