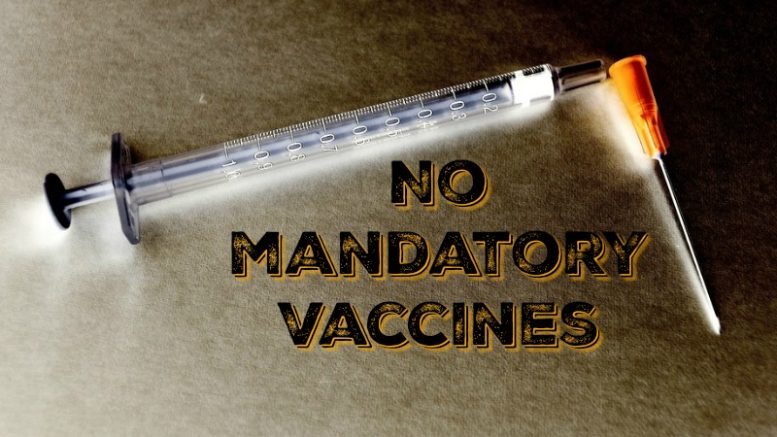 At first, it was a single vaccine promoted to deal with COVID-19. Technocrats are now hinting that it will take a series of vaccines, yet actual immunity may never occur. This bait-and-switch operation sets the stage for a continuum of invasive substances to be injected into your body. Are you prepared for it?

While Dr. Anthony Fauci says he’s hopeful that a COVID-19 vaccine will be available ‘by late fall or early winter,’ it may not be as simple as one jab for a lifetime of immunity, according to the LA Times.

For starters, a COVID-19 vaccine can be released if it’s ‘safe and proves effective’ on as few as 50% of those who receive it, according to recently released federal guidelines. What’s more, the definition of “effective” means that it simply has to ‘minimize the most serious symptoms,’ according to the report.

“We should anticipate the SARS-CoV-2 vaccine to be similar to the influenza vaccine,” said Dr. Kathleen Neuzil, director of the Center for Vaccine Development at the University of Maryland. “That vaccine may or may not keep people from being infected with the virus, but it does keep people out of the hospital and the ICU.”

Because of this, experts say that the first round of COVID-19 vaccines probably won’t eliminate the need for masks, social distancing and other measures. So – after all the promises made by government officials, a vaccine may only reduce symptoms, and may turn into a recurring shot that only works on half the population.

Developing a vaccine capable of inducing “sterilizing immunity” — that is, the ability to prevent the virus from causing an infection — takes time and research, which might not be possible as death tolls continue to rise and the recession grows deeper. Yet with so many companies on the hunt for that vaccine, there is hope one of them might actually achieve it...

Scientists had studied other coronaviruses — SARS and MERS — and mapped the novel coronavirus’ genome not long after the first COVID-19 deaths were recorded. They identified the spike protein on the virus’ outer shell, which the virus uses to infiltrate the host cell and created a three-dimensional model of the virus to see how antibodies block infection by binding onto the spike protein.

Even so, scientists don’t yet know what immunity against the virus looks like. That information typically comes from studying the body’s natural response to disease. The number of T-cells and neutralizing antibodies that fight off an infection can become a blueprint for a vaccine. –LA Times

The problem is that “the novel coronavirus hasn’t been around long enough,” according to Dr. Mark Feinberg, CEO of the International AIDS Vaccine Initiative – who noted that an Ebola vaccine went from Phase 1 to Phase 3 clinical results in just 10 months and was nearly 100% effective within 10 days of a single dose being administered.

On the bright side, it could reduce the spread of the virus, creating pockets of immunity throughout the country according to Dr. Peter Hoetz, dean of Baylor College of Medicine’s National School of Tropical Medicine.

“Ideally, you want an antiviral vaccine to do two things,” said Hotez. “First, reduce the likelihood you will get severely ill and go to the hospital, and two, prevent infection and therefore interrupt disease transmission.”

For the current pandemic, “the bar does not seem that high,” he added.

Meanwhile, Operation Warp Speed – the Trump administration’s program to accelerate a vaccine, has a goal of delivering 300 million doses by January. The program has identified 14 ‘promising candidates‘ – of which seven have been identified as front-runners. Of those, three have had early clinical trials evaluated independently.

The vaccine being developed by Moderna and the National Institutes of Health was deemed “promising” in an editorial published in the New England Journal of Medicine, and two studies in the Lancet delivered a similar message for vaccines being developed at Oxford University and by the Chinese company CanSino.

These vaccines have induced an immune response in people participating in early tests, but inducing an immune response does not always mean success in fighting a disease. For instance, scientists recently developed a vaccine for another respiratory virus that increased antibodies but failed its Phase 3 clinical trial. –LA Times

Other issues puzzling vaccine researchers include why some people produce high levels of neutralizing antibodies to COVID-19, while others do not.