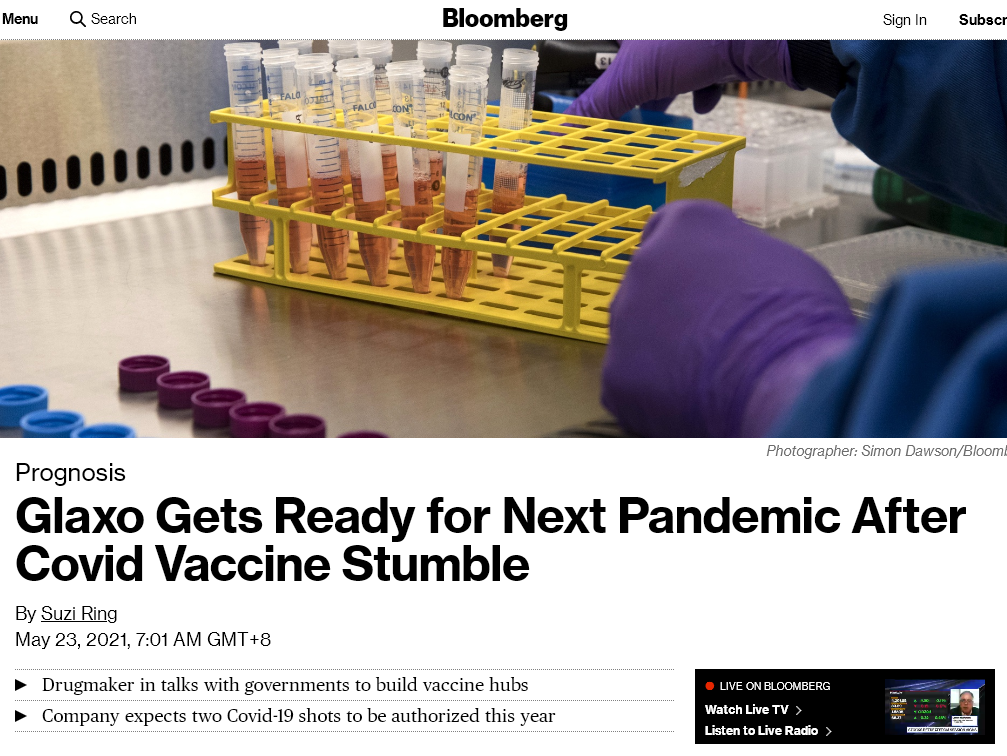 Now that Pfizer and Moderna have demonstrated just how profitable a vaccine business can be during a global pandemic, drug companies around the world are rushing to prepare for either a resurgence of mutant COVID-19, or perhaps some new virus, as Dr. Anthony Fauci and others concede that SARS-CoV-2 may have escaped from a Chinese lab, instead of emerging from the wild.

In a report published Monday, Bloomberg pointed to the efforts of GlaxoSmithKline, which is investing in its vaccine business in order to get ahead of the next pandemic, while continuing to develop the next generation of COVID-19 vaccines (since its international production capabilities could give it a leg up in catering to the developing world).

It’s just the latest indication that President Biden’s support for a WTO proposal to waive IP protections for COVID vaccines is mostly lip service, and that the pharmaceutical industry will do everything in its (considerable) power to stop it.

What’s more, GSK is in talks with the British government to onshore more of its vaccine development and research capabilities, alongside production, according to the company’s vaccines chief, Roger Connor. These labs will be equipped with “vaccine technologies to tackle deadly viruses of the future, he said in an interview.” Presently, Glaxo’s main R&D vaccine hubs are based in Belgium, Italy and the US.

GSK and its hedge fund backers, which include Paul Singer’s Elliott Management, are in the process of spinning off the company’s consumer health division next year and leaving its biopharma and vaccine arms, businesses that Connor describes as the company’s “crown jewels.”

Of course, the best-case scenario for GSK would be that it’s present COVID jab trials lead to approval by year’s end, leaving it plenty of time to tap into the massive international market for the next generation of vaccines, would require a proposal to waive IP for vaccines to fail.

GSK and its partner Sanofi plan to start advanced trials with more than 37,000 people in coming weeks, with multiple formulations of the vaccine to better protect against variants such as those first found in South Africa and India. The studies will predominantly be outside the U.S. and focused on geographies with higher infection rates to give “every chance of making the trial successful,” Connor said.

“Yes, there are others making more from Covid in the short term,” said Connor. “However, when we look at the overall portfolio, innovation and current assets that we have, we think it’s stronger than anyone’s and slightly under-appreciated at the moment.”

Even before COVID, the company’s vaccine revenues were rising, having climbed 50% in a four-year period. Shingles vaccine Shingrix is one of the company’s biggest products and Connor says there are other blockbusters in the pipeline, including its Respiratory Syncytial Virus shots for older adults and pregnant mothers, both in advanced trials.

To sum up: anybody looking to invest in a company that’s well-positioned to combat the next pandemic ought to give GSK a look.